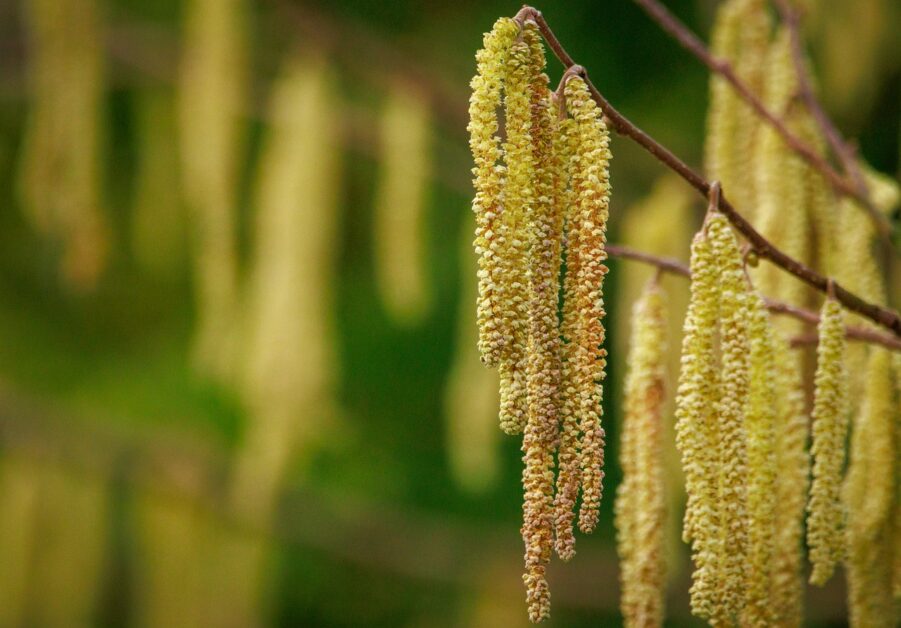 Observing nature is a fantastic way to track the seasons. After a long winter, most people are eager for signs of spring. We may find ourselves looking for the first robin in our back yard, or for trees to start leafing out. In today’s Wildlife Spotlight, I’m focusing on a poorly known but very early sign of winter’s end: catkins. Their appearance is a true harbinger of spring, but for many of us, they also mean our allergies will be acting up. Whether you want to learn more about trees or want something to blame for sudden sniffles, it’s worth knowing a thing or two about catkins.

Catkins are a weird and fascinating kind of tree flower. For one thing, they are extremely un-flower-like. Very few people think “flower” when looking at the weird dangly-bits hanging off of oak or cottonwood trees in early spring. Catkins have strange shapes: they often hang from branches or stick out in fuzzy knobs like they do in willows.

The name “catkin” is though to come from an old Dutch word, katteken, meaning “kitten”. This adorable name probably came from some of the fluffier catkins of the White willow Salix alba, also known as Pussy willows.

These shapes are actually long clusters of petal-less (or tiny-petaled) flowers all bundled together. This is unusual in flowering trees; most of them have somewhat flashy flowers with petals and nectaries to attract pollinators. Catkins don’t look particularly enticing, and just seem to have loads of pollen. We’ll discuss why below.

You’ll only find these unusual flowers on trees from particular groups. Here are some common trees and shrubs that have catkins:

Not your typical flower

Most catkins consist of male flowers—that is, parts that produce pollen, which contains the sperm needed for reproduction. For plants to reproduce, that pollen needs to get from male parts to female ones. For most flowering plants (or Angiosperms) this is done by some animal that acts as a pollinator. In other words, some animal must move that pollen from the male to the female flowers or flower-parts.

Non-flowering plants like mosses, liverworts, and ferns have pollen or sperm that moves on its own by flowing or swimming through water. Conifers like pines and firs, also non-flowering plants, let their pollen be carried by wind. Many catkins follow this same tactic, despite all belonging to the flowering plant group.

Catkins are a simplification of the more complex structures that flowering plants evolved to take advantage of animal pollinators, and a return to a simpler way. With the exception of willows, which flying insects often visit, other tree species with catkins rely on wind to move their pollen.

The principal advantage of wind pollination is that the trees don’t have to rely on mammals to reproduce. With no need to appeal to animals like us, they don’t waste energy trying to smell nice or look attractive. And that frees up resources for other things.

For an animal to pollinate a flower, it only has to bring a single tiny pollen grain and deliver it to the stigma. This female part of the flower receives the pollen grain, which can then proceed to fertilize the egg cells further inside. Since the animal, let’s say a bee, does the work of finding the flower, not a lot of pollen is needed. When things are wind pollinated, as with pines and catkin trees, there’s nobody around to bring that pollen directly to where it needs to go.

Wind can move the pollen around (in a process called anemochory), but it can’t always get it into exactly the right place. So the chance of any individual pollen grain getting where it needs to go is pretty darn low. As a result, wind pollinated trees produce TONS of pollen. How much exactly? A single cluster of birch catkins on a single branch can release tens of millions of pollen grains. That means billions of pollen grains per tree.

Unlike pollen from animal-pollinated flowers, which is sticky so it can hang on while animals move from place to place, wind-dispersed pollen is tiny and designed to float. When it gets kicked into the air, it hangs around as a fine dust and can drift for hundreds of miles or kilometers.

The absolute loads of pollen that catkins have to put out, and its ability to hang in the air are what makes for lots of sniffling and sneezing. The levels of tree pollen in the air in forested areas can easily be high enough to affect air quality ratings. But why does this only happen in the spring?

Deciduous trees (which include the common catkin-bearing species) lose their leaves in the fall. This is actually an advantage for wind pollination, because their big flappy leaves might block pollen grains from reaching their female flowers. So catkin-bearing trees “bloom” and put out their catkins in late winter and early spring, before they grow their leaves back. This allows them to move all of that pollen around without leaves messing with the air currents.

In fact, to get a jump on the spring, many trees will grow their catkins in the fall and pause their development. The catkins remain tough and unfinished during the winter, and then ripen in the spring when it’s time to put out some pollen.

All this means that there will be loads of pollen flying around by early spring. When the light hits just right, sometimes you can see whole clouds of it shaking loose from the catkins under a light breeze, or when a bird or squirrel jostles a branch.

Most plant enthusiasts know that flowers are a great way to tell species of plants apart. It turns out that catkins are no exception. Even if they aren’t particularly flashy, catkins still look different between species, even within the same genus. This can be especially helpful since they’re usually out before leaves have appeared. They can be an excellent naturalist tool if you’re out during winter or early spring.

Since they hold tons of pollen, which is rich in protein, they also make excellent food for other animals. Many catkin-bearing species, like birches and alders, grow near rivers, lakes, and ponds. When their catkins fall into the water, they make excellent food for insect larvae living on the bottom. If you’re a fishing fan, you might thank these trees for feeding stonefly and caddisfly larvae, which themselves become great food for trout and salmon.

Thanks for reading about catkins!

Have you come across interesting wildlife eating catkins? Do you have a plant or animal species you’d like to learn more about? Let me know in the comments or the contact page!