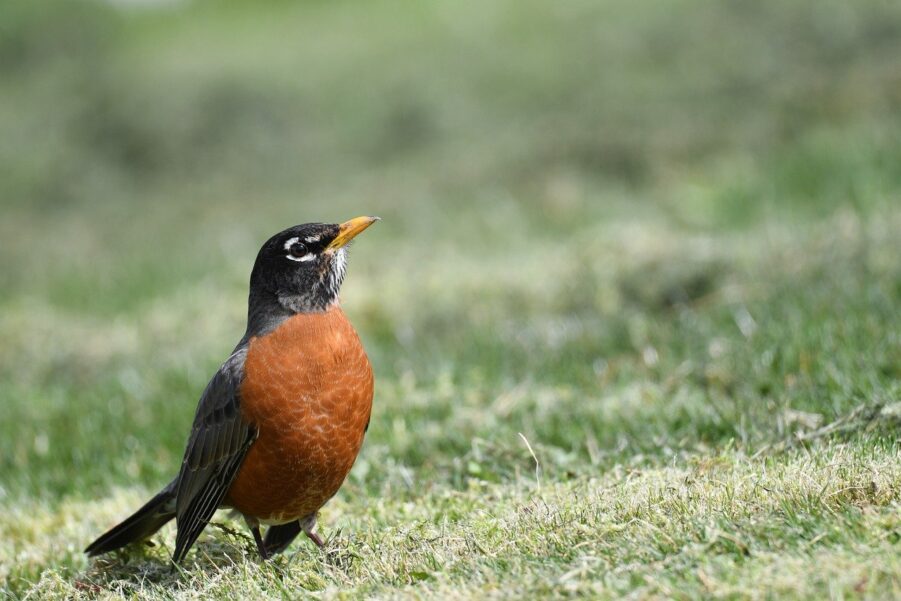 The American Robin is one of the most widespread and familiar American birds. Known for their energy, cheeriness, and musical voice, they’ve got more than a few theme songs. But that’s not their only claim to fame. The American Robin is the state bird of Wisconsin, Connecticut, and Michigan, which gives some idea of their wide distribution.

You’ll see robins flying overhead or hopping along the ground in most of Canada and the United States in Springtime. For many lucky children, a pair of nesting robins are a first chance to watch bird behaviors close to home.

For this first Wildlife Spotlight post, let’s get to know the American Robin (Turdus migratorius).

What is a robin? As we’ll see below, the answer gets a little complicated outside of the U.S. and Canada. But for now, let’s keep it simple: the American Robin is a big ol’ thrush. Thrushes are birds from the family Turdidae (from the Latin word Turdus, for thrush). The 174 (as of 2021) species in this family are small- to medium-sized songbirds. Thrushes generally known for:

American robins are on the heftier side for their family tree, and are notably larger than their nearby cousins. The Hermit thrush, Swainson’s thrush, and Gray-cheeked thrush, all beautiful forest singers, are considerably smaller.

Although robins have the first three of these characteristics, they differ from many of their relatives in the fourth. Unlike many other thrushes that you might encounter, robins have red-orange feathers on their fronts. They can’t hide their heritage, though—young fledglings will show speckles on their fronts until their first molt.

It’s actually the robin’s unusually colorful chest that leads us to the origin of its name. Old-school naturalists like John Muir lovingly referred to it as “Robin-redbreast”, although that name originally belonged to someone else. The European robin (Erithacus rubecula; which British birders just call “robin”) is the original.

European robins are much smaller birds in the Old-world flycatcher family, Muscicapidae. They have orange (rather than reddish) fronts, and spend more time in gardens and low vegetation than on the ground. Their shared name comes only from the reddish coloration on their fronts, and not from any evolutionary relationship. European naturalists assigned the name to the American Big ‘Ol Thrush in colonial times, and it stuck.

The American Robin’s reputation as a harbinger of spring is not an unfounded one. Robins prefer to hunt and eat nutritious invertebrates from the ground and leaflitter. They’re especially good at finding worms and yanking them from the ground—a common sight in grassy areas. Because of this diet, robins tend to stick to areas where average temperatures are high enough to keep the ground from freezing.

Rather than migrating in huge, single journeys like many neotropical migrants, robins only go as far south as they need to to find suitable conditions. Because they tend to follow conditions above a minimum temperature (around 37°F or 2°C), they start moving North earlier than other birds.

During Spring and Fall, this can lead to waves of southbound or northbound robins showing up on lawns or in trees overnight. These huge migrating flocks are a welcome sight at the end of a long winter. Since they show up when the average temperatures are getting above freezing, there is good reason to call them harbingers of spring.

Once robins have arrived somewhere for the warmer breeding season, they get straight to business. Robins can often be seen rooting in the ground for invertebrates and singing melodiously from perches around fields and yards. The classical depiction of a robin pulling a worm from the ground or bringing it to a nest of hungry, pink chicks is spot-on during this time of year. Protein-rich earthworms become a major part of their diet during the breeding season, and serve as the primary baby-food.

Robins hunt for earthworms and other invertebrates by hopping along the ground and pausing frequently to look for movement. The commonly held belief that they can hear worms moving underground is unfortunately not true, cool as it would be.

It seems like when robins aren’t patrolling our lawns and soccer fields, then they’re singing. Male robins have a lilting, flute-like song that they use to declare territorial space for nesting. This serves to stake out territories and claim them from other males, and to advertise their eligibility to females.

These beautiful songs continue throughout the Spring and early Summer and are most frequent at dawn and dusk. People often describe the song as a bouncing, melodic “cheery-up, cheerio, cheery-up” in repeated upward- and downward-inflected phrases. It is the quintessential sound of lazy summer evenings or fresh springtime sunrises.

Anyone who has had the fortune to find a robin’s nest is familiar with the beautiful sky-blue color of their eggs. The nests themselves are typically a frame of thin twigs lined with grasses and mud. This use of lots of mud in an otherwise normal cup-nest is a great way to tell robin’s nest from those of other species. Once this nest is completed, the female will lay 3-7 gorgeous blue eggs inside and incubate them for about two weeks. Their beautiful color is, as you might imagine, the origin of the color Robin’s-egg blue.

When Fall arrives and robins are done being territorial, things start to get very social. As insect food becomes less available, they also start to rely more on their other favorite food: berries. Since berries occur in patches (particular bushes, groves, or vines), robins concentrate in groups to eat them. They also hang out in bigger groups for night-time roosting and migration. Some naturalists refer to this shift in behavior as winter gregariousness.

Fall and Winter flocks of robins can get huge, including hundreds to thousands of birds, and when they find a good feeding or roosting site it can get loud. Depending on the types of berries or fruit that they are eating, and how long its been there, there can be other problems.

For example, Honeysuckle (Lonicera sp.) berries and some fruits are prone to fermenting. This means that later in the winter, some berries will have a small alcohol content. As big groups of robins binge on berries, things can get pretty rowdy. That’s right—drunk party-robins are absolutely a thing.

Just because the American robin is easy to find doesn’t mean it isn’t a fantastic animal. Their affinity for our human-made environments makes them easy to observe and study. Because of this, American robins are an excellent “starting bird” for understanding bird behavior and ecology.

Even though many people see them year round, their changes in diet in behavior are exciting to watch and tell us about the passing of seasons. Next time you hear a robin or see a flash of red-orange chest feathers, take a moment to appreciate this charming bird: an American classic.

Want to learn more about American Robins? Check out the Nature Guys episode with Bill and Bob, Knowing Robins.

Thanks for reading about the American robin!

Do you have a wildlife species that you’d like to see in a Wildlife Spotlight? Bugs, large mammals, plants, fungi, micro-organisms, it’s all fascinating and it’s all fair game. Let me know via the contact page!