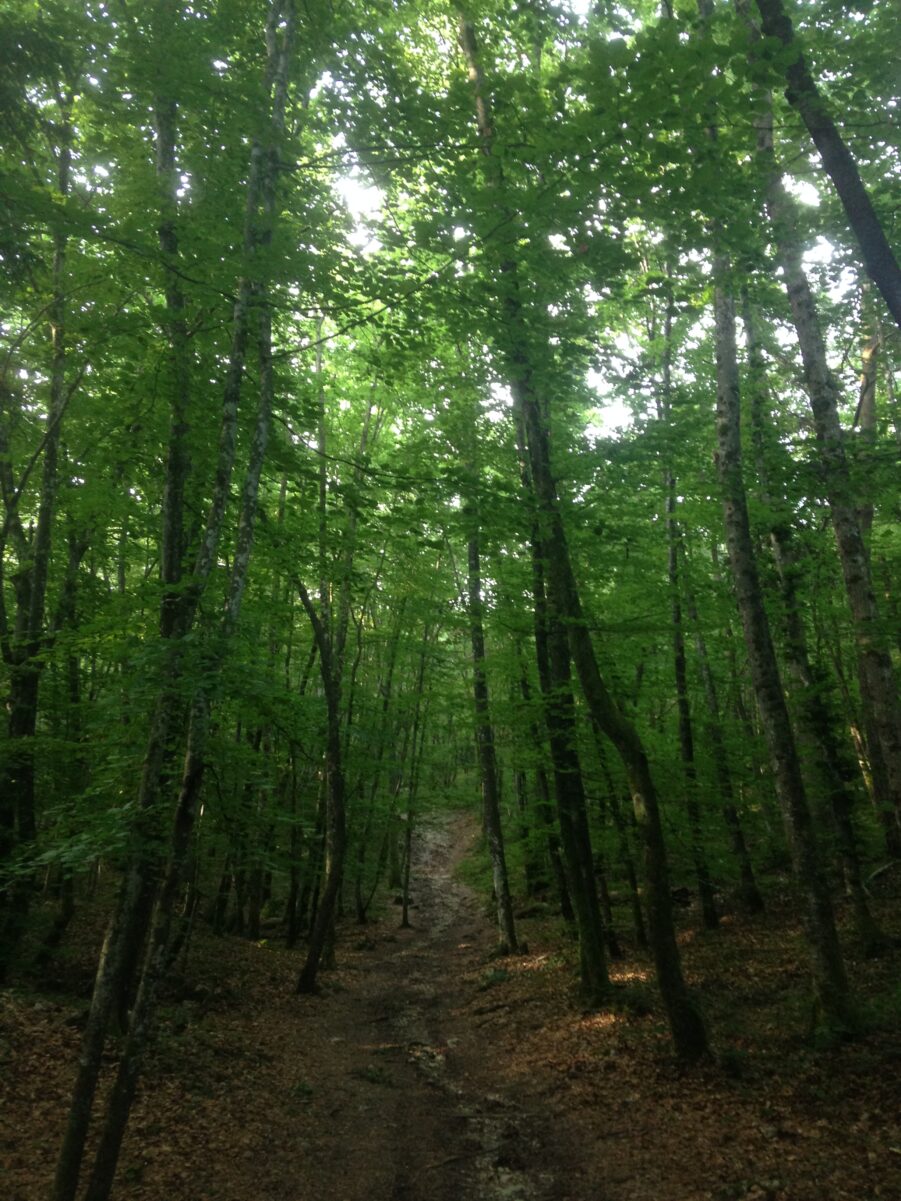 Green is such an ever-present and widespread color in nature that it symbolizes the health and vitality of our natural world. Almost anywhere you go in springtime, you can expect to see green; from mosses and algae to all kinds of herbaceous plants and trees, green dominates our idea of natural landscapes and represents life, growth, and abundance. But why are trees and other plants green?

What makes that color so widespread?

At face value, we know that it’s because plants are green–specifically, when they are healthy and thriving. When plants are unhealthy, dying, reaching the end of their life cycle, or preparing to lose their leaves in the fall, we often see them turn yellow, brown or some other color. We only see those beautiful shades of green in living tissues.

Living, healthy plants are green because of a group of greenish pigments called chlorophyll which is part of the molecular machinery that makes photosynthesis possible. Photosynthesis is a biological process that captures energy from the sun and uses it to build food molecules out of carbon dioxide (from the air) and water (often from the ground). People often call this “eating sunlight”, but it is more like “making snacks from sunlight”.

Like any other living thing on Earth, photosynthetic plants have to get food (chemical energy) to fuel their cells and stay alive. The difference between photosynthetic things like plants or algae and, for example, animals or fungi, is that they produce their own food chemicals through photosynthesis by converting light from the sun into chemical bonds that form simple food molecules—sugars. Plants digest these snacks as fuel, or store for later in more complex forms that last longer. These are usually what we call starches (think potatoes or cassava).

So, like the rest of us, plants need to get that bread. Their green color helps them do that. This green pigment is concentrated in special cellular organs called chloroplasts, and plant tissues are typically jam-packed with them, leading to that green color. The “chloro” in chloroplast and chlorophyll comes from the Greek word chloros, which describes a yellowish green.

Ok, so plants are green because a green pigment is a major component of the machinery that helps them convert light into food via photosynthesis. But that leads to another question:

Why is chlorophyll green?

Chlorophyll is a pigment, which is a chemical produced by a living organism that absorbs certain colors and reflects those that it does not absorb. This happens because pigments absorb certain wavelengths of light: without getting too technical, light is a form of radiation that travels in a wave, and our eyes perceive different wavelengths of that light as different colors.

Chlorophyll in plants and many green algae absorb red and blue light, but don’t absorb all of the green or yellow light that hits them. This reflects some of those wavelengths of light, which our eyes see as green.

So this gives us an idea of the mechanism that makes plants and their chlorophyll green to our eyes. But since there are all kinds of pigments in the world—think about the diversity of colors you’ve seen in nature, many of those are due to pigments!—why are plants only using chlorophylls, a set of green pigments, for their photosynthesis? Aren’t they being inefficient by leaving ‘leftovers’ when converting light to food? Isn’t all that green going to ‘waste’?

Why aren’t plants blue or green or purple?

As it turns out, a lot of the sun’s light that makes the long journey across our solar system, through our atmosphere, and to Earth’s surface every day consists of a lot of yellow- and green-wavelength radiation. We now know that most plants’ chlorophyll absorbs light mostly along blue and red wavelengths. This leaves that green behind and gives plants the beautiful color that we associate with life on earth.

Scientists have been wondering over this “wastefulness” in plants since we first understood chlorophyll’s absorption. Why waste the most abundant visible light when you could get way more light energy and produce way more food?

For a long time, we had three major explanations, which could all be true at once:

So what do we know now about green plants?

In 2020, a team of engineers, physicists and plant scientists took a different look at this question. What would be the advantages of plants’ harnessing light on the edges of the hyper-abundant green-yellow light from the sun, rather than the most abundant light? They specifically focused on the photosynthetic “machinery” within the chloroplasts that harnesses light energy to build food molecules.

It’s helpful to think about this machinery as a dam or a water-mill. Water moves through a mill’s wheel, or a dam’s turbines, bringing kinetic (movement) energy. The mill converts that energy into electricity or mechanical power for grinding grain, running saws, or something else useful. The molecular “machines” inside of plants do something similar with the ‘flow’ of light energy from the sun.

The chlorophyll pigments absorb frequencies of light that they want. Next, they use that energy to change the energetic state of an electron. Then, they can use those energized electrons for useful chemical reactions. Like water through a turbine or water wheel, the electron passes efficiently down through a chain of molecules to create a series of energetic bonds. Ultimately, these create food molecules for the plant, which they consume or use to construct tissues.

Just like a dam or a mill, having too much or too little flow is not helpful, and in fact can damage the machinery and make it difficult to use. A massive flood could wipe out a waterwheel or undercut a dam, while a drought degrade or stop up equipment.

Getting it all going again has start-up costs and is highly impractical. On a molecular level, the plants’ green machinery may be damaged by too much or too little light. This happens when excessive excited electrons react with things that the plant doesn’t want them to or when the chain of electron reactions trickles to a halt, breaking the whole process and requiring a restart.

Remember the team of scientists and engineers thinking of advantages of red and blue light? Well, they figured that maybe taking light from those “shoulder” colors meant that when the flow of light hitting leaves fluctuated, that the amount of energy gained would fluctuate less. So when shading, the movement of the sun, or even the swaying of other leaves affected the amount of light, the leaves would still have steady energy flow. The advantage was not efficiency, that is, getting as much light as possible, but stability: keeping a certain, perhaps lower, level of ‘flow’ going through their dam that is as steady as possible to keep the machinery operational.

They found strong support for this idea in existing plants. The authors also found that photosynthetic organisms like certain bacteria and algae that absorbed colors other than green did so because, in their particular life circumstances, those colors enabled them to do the same thing: hedge their bets and keep a steady flow of energy.

Question: Why are plants green?

Answer: Because Chlorophyll is green!

Question: Why is chlorophyll green?

Answer: Because it absorbs red and blue light, reflecting some of the green!

Question Why does chlorophyll absorb red and blue but not all green?

Answer: To keep the plant’s photosynthetic machinery healthy and working, and avoid absorbing too little or too much energy

If you think about it, this is a pretty beautiful lesson in nature: sometimes reliability is the best option; finding the absolute best performance may often come at a loss but settling for a little less can come on out on top in the long run.

Thanks for reading why are trees green!

Do you have plant questions you’d like to see answered on Gulo In Nature? Send me a message or comment below!