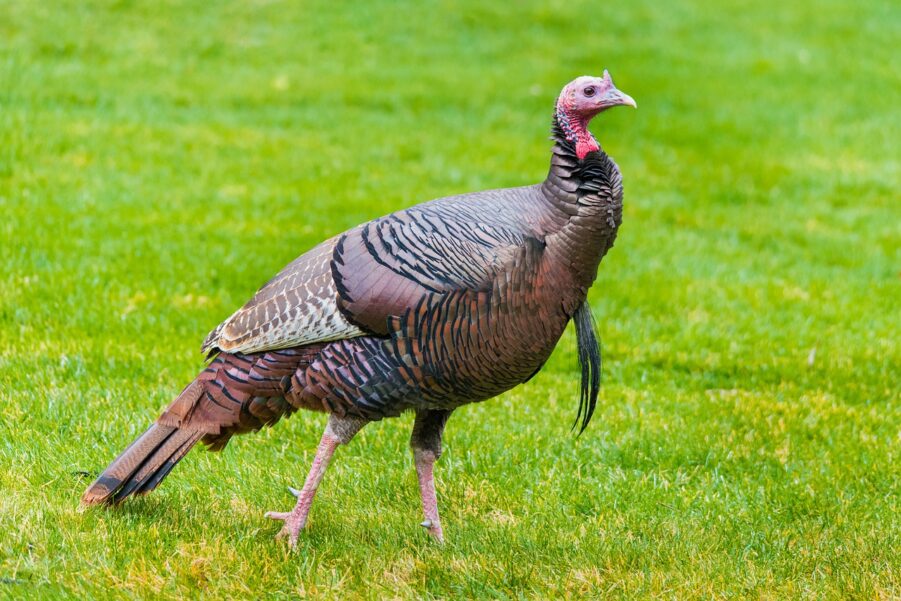 Rick and Morty is a hilarious sci-fi show on Adult Swim that is no stranger to scientific references. A recent episode brought up an unexpected natural history fact that left fans wondering. The climax of “Rick & Morty’s Thanksploitation Spectacular” presented an interesting question about turkeys. Do turkeys sleep in trees? Here’s how it came up:

Let’s set the scene. Thanksgiving in Washington, D.C. A huge cornfield, summoned by an ancient alien shaman, has sprung up on the National Mall. Amidst the dense stalks, two ghoulish sets of extraterrestrial warriors fight an army of hybrid turkey-human super-soldiers. The turkey soldiers are evidently trying to take over the world, and (I mean, obviously) turn everyone into turkey people. Rick, Morty, and the president of the United States confront the turkey-monster’s leader. He’s a turkey-hybrid-clone of POTUS (because of course he is). Rick and Morty tell Turkey-president that the jig is up and that he should surrender. The Turkey President responds:

“My kind has always dealt with predators. That’s why we sleep in trees. And that’s why in the wild, we fly!”

Action resumes without further discussion of this out-of-left-field nature tidbit. POTUS and Turkey-President engage in a vicious hand-to-hand struggle. Meanwhile, Rick and Morty blast off to follow the Washington Monument into space (again, because, duh). Their mission: prevent it from showering Earth with cosmic waves that will convert the rest of America’s turkeys into supersoldiers. In a momentary pause in the chaos, Morty, seeming hesitantly thoughtful, asks his Grandpa:

“Is it true what turkey-man said, that turkeys sleep in trees?”

He’s abruptly cut off by Rick’s usual belching nihilism, but the rest of us were left hanging along with Morty.

Was Turkey Man telling the truth? Do turkeys really sleep in trees?

I’m excited to report that this is a pretty simple answer: Yes, absolutely. In fact, the writers of Rick and Morty are not only right that turkeys can fly, and sleep in trees. They are also right about the reason that they do this. Specifically, to avoid being turkey dinner for any of their natural predators.

I’m not particularly surprised at this accuracy. As I mentioned earlier, despite the show’s zanyness and wild disregard for narrative niceties, the actual science tends to be pretty well-researched. It is often based (at least at the beginning) on some observed or theoretical concepts in our universe. Apparently (and to my great pleasure) this extends to natural history knowledge.

Back to turkeys, though. The Wild Turkey (Meleagris gallopavo), familiar to most Americans as just “turkey” is one of North America’s heaviest flying birds. Males weighing up to 24 pounds (11kg) are not rare, with occasional individuals up to 30 pounds and beyond! For reference, the United States’ national  bird, the Bald eagle (Haliaeetus leucocephalus) weighs only around 9 pounds on average. This is despite the eagle’s whopping wingspan usually exceeding 6 feet.

Too big for the air: Can turkeys fly?

Given that Wild turkeys are absolutely beefy, it’s surprising that they can fly at all. Realistically, they rarely seem to do any flying without a really good reason to do so. The heavier the bird, the harder it is to get all that bulk moving. That’s a lot of work!

Because of this, females, which average just about half the weight of male birds flu more often than males. That difference in size is what naturalists call sexual dimorphism (but more on that in another post!). Another interesting point—domestic turkeys, which are bred to be way heavier and meatier (for obvious reasons) than wild turkeys, cannot fly, because they are way too big! Notably, Turkey President specified “in the wild“, so I guess he was right about that, too.

Why turkeys sleep in trees

Generally speaking, wild turkeys typically fly when threatened by a predator (or a person chasing them!), but this isn’t particularly common to observe unless you’re one for turkey-chasing. The time when turkeys fly the most, though, is going to bed at night. Since most larger mammal predators are more active at night, it’s much safer to sleep up in the trees.

Up there, things like coyotes, bobcats, and lynx can’t easily reach them. At least, not without making a big racket. Turkeys also have poor night vision. This means that they are less likely to notice a predator sneaking up on them in the dark. So turkeys will sleep in trees. More often than not, they do it in groups. If you’re out early enough in the morning, you might accidentally happen upon a treeful of gobblers clucking themselves awake just around sunrise. It’s a bizarre experience.

Ornithologists describe the way that birds sleep, and where they do it, as roosting behavior. We can refer to the trees in which turkeys do their snoozing as roost trees. Turkeys typically roost in tall trees with some underlying branches that they can use to hop up into the canopy. If they don’t have to, they don’t want to fly all that way!

Turkeys also like to have open habitat around the tree for landing and looking out for predators. So if you find any branchy, big trees around clearings, amidst mixed hardwood forest, you may be looking at a good roost tree. Turkeys also love foraging for nuts and seeds on the ground. This means that forests with a lot of hickory or oak trees that drop nutritious seeds are often a good bet.

Of course, after a nice, safe night’s sleep, turkeys need to come down, too. I witnessed this once first-hand while studying woodpeckers in California, and it scared me half to death. I had hiked out to watch the woodpeckers that I was observing before sunrise. I set up a hunter’s blind to wait for them to arrive at their favorite tree. The blind was like a cozy little tent with a peep-hole to watch birds through. An hour or so passed while I waited, and I started to doze off. I awoke to an incredible rushing of air and rhythmic swooping sounds. I couldn’t see a thing in there, so I scrambled out of the blind ready to run for my life.

I ran out straight into a cloud of huge turkeys that were gliding and fluttering ungracefully down from their roost tree. It was a huge sycamore; I had set up the blind right beneath it. I had been totally unaware at the time that dozens of huge turkeys slept soundly sixty feet above. The turkeys were just as surprised as I was, and they disappeared with an explosion of gobbling and huge, brown, flapping wings.

Needless to say my shy woodpeckers never showed up that day; probably a bit too much commotion.

To the Rick and Morty fans out there: Turkey President was right. Morty can rest easy. Also, go and see some tree-sleeping turkeys for yourself,  because it’s totally neat.

Thanks for reading about whether turkeys sleep in trees!

Do you have other nature questions from popular media worth covering in Biologist Ruins Everything? Let me know with a comment, using the Contact form, or on social media.