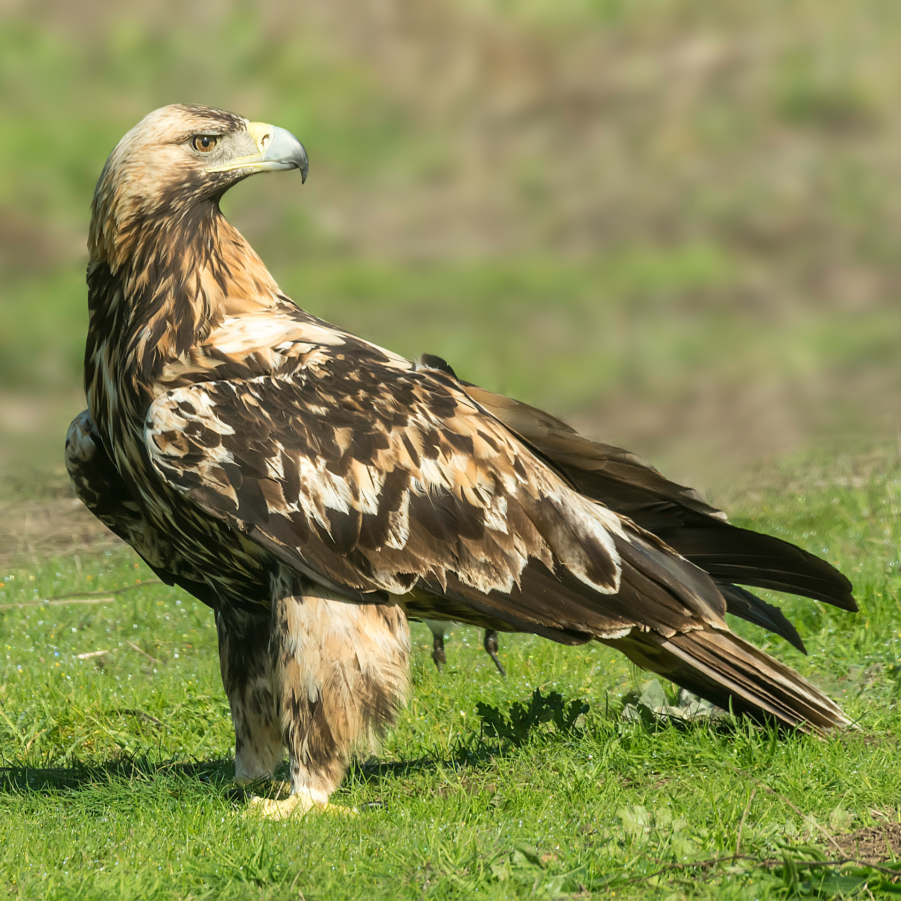 The difference between hawks and eagles comes up often when I take people birding. Dazzled by some large bird of prey, we’ll admire it through our binoculars for a while. Sooner or later, someone asks, “”well, is that a hawk or an eagle?” or, when I answer, they ask “well how did you know that?” As you’ll see, it’s not as simple as it might seem. In this Naturalist Answers post, let’s explore the differences between hawks and eagles.

Hawks and eagles both belong to the family Accipitridae, which are mostly birds of prey. They include some of the largest and heaviest predatory birds in this group. However, what people call eagles and hawks belong to different sub-groups within this larger family.

In total, there are around 270 species of what people tend to call hawks. Specifically, hawks belong to two sub-families or tribes within Accipitridae, known as Accipitrinae and Buteoninae. The Accipitrinae are fast and stealthy, with long tails and a penchant for eating other birds.

On the other hand, the Buteoninae are bulkier, slower, and tend to eat larger prey, including small mammals like voles and mice. For American readers, the widespread Red-tailed hawk (Buteo jamaicensis) is a classic example. Meanwhile, in Europe and Asia, the Common buzzard (Buteo buteo) is much more familiar.

On the other hand, eagles belong to four main sub-groups of the raptor family, which are primarily genera:

Let’s learn a little about what makes each of these groups special, how to tell them apart, and where to find them.

The fish eagles in the genus Haliaeetus often have white heads, and, you guessed it, catch and eat fish. These include the Bald eagle (Haliaeetus leucocephalus) and the massive Steller’s sea eagle that wowed birdwatchers across the Eastern US last year.

The snake eagles, like those of the genus Circaetus, are medium sized and as you probably guessed (two in a row!), they often eat reptiles. They are mainly found on the African continent, but one migratory species breeds well up into Europe and Western Asia. I was lucky enough to see that species, the short-toed snake eagle (Circaetus gallicus) during my field research at Doñana National Park in 2019.

Next up, we have the giant forest eagles. These monstrous raptors are primarily in the genera Morphnus and Harpia. If you’ve ever seen footage of a Harpy eagle (Harpia harpyja) carrying off 20+pound (~10kg) monkeys, then you know how this group gets its name. These tend to be big, scary, and found in tropical rainforests.

Finally, the booted eagles, also known as true eagles, belong to the genera Hieraaetus and Aquila. You can call these guys the O.G. eagles. After all, Aquila is the Latin word for eagle. This group includes the Golden eagle (Aquila chrysaetos) which ranges across much of the Northern half of our planet.

These are a lot of Latin names, but what’s important is just to remember that hawks and eagles belong to different groups. In fact, without these scientific names, there would be a lot of confusion. For example, what Americans call hawks, which belong to the sub-family Buteoninae, are called buzzards in Europe, Africa, and Asia. Now that we have cleared up some taxonomy, let’s get into the nature facts.

Since they belong to lots of different groups, the difference between hawks and eagles is a little messy. However, their size is a majorly helpful, and pretty consistent distinction. Overall, eagles are typically bigger than hawks, but it’s not a clean divide.

Generally speaking, though, most eagles that you encounter will be larger than hawks. Of course, for predatory animals, their body size has another major implication: what they eat.

The larger the bird, the larger the prey that they can subdue and carry away. In fact, many ornithologists consider prey type and size to be the best rule-of-thumb for the difference between hawks and eagles. If the bird can hunt vertebrate prey over 50cm in length, chances are it’s an eagle.

What are vertebrate prey? This means anything with a spinal cord. In other words, reptiles, fish, mammals, birds; anything from grouse to sloths and rabbits. While hawks will take vertebrate prey, it is likely to be much smaller, whereas eagles will take larger animals with their greater weight and size. For instance, golden eagles have been observed taking baby mountain goats.

The body proportions of these two loose groups of aerial predators are also more or less consistent, if harder to notice. I can remember a guide in Spain pointing out a short-toed eagle on a power line at quite a distance.

It wasn’t particularly enormous like the golden or bald eagles in North America, so I was a little confused. There had been all kinds of hawks around that day. “How do you know that it’s an eagle?” I asked in Spanish. “Because it’s got a really big head,” he responded.

Later on that year, and looking at eagles back in the U.S., I could see what he meant. Most of the time, eagles’ heads and bills look studier and heavier than hawks. Their wings also appear bulkier, and squarer, especially in flight. When eagles are flying, they typically keep their wings very level and sticking straight out from their bodies at right angles. It gives their flight a very “heavy cargo plane” kind of vibe.

Their shape or silhouette in flight can also be different. Since these are both soaring birds, they spend less time flapping and you it’s easier to get a sense for their shape in the air. I notice more often that those big, squarish eagle-wings show off the length of their primary feathers.

In other words, the “fingers” of the wing, the outermost, long flight feathers, tend to be more visible and spread out. This is similar to vultures, but it’s easier to tell a vulture from an eagle. Hawks will often have their wings more rounded or curved from the body during flight, especially when they’re soaring.

The last difference between hawks and eagles that has been especially helpful to me is their different vocalizations. Like other traits, there will inevitably be some overlap, and some variation among the many sub-groups that we divide into hawks and eagles. Generally, though, there are some consistencies. Especially in the Northern hemisphere, hawks more often make hoarser screeching sounds.

The Red-tailed hawk’s voice is often used as a sound effect for vultures and eagles in movies, and will sound familiar to many readers. By contrast, eagles like the golden and bald eagles have higher-pitched, more chirpy sounds. This is pretty unexpected coming from much larger, more powerful animals, but then again, nature is often weird and unexpected.

Here are some great books on hawks, eagles, and other birds of prey if you’d like to learn more.

Go check out some birds of prey!

I hope that this primer will help you find the differences between hawks and eagles on your own outdoor adventures. If you have additional tips or tricks to distinguishing these majestic raptors, be sure to share in the comments or via the Contact page.