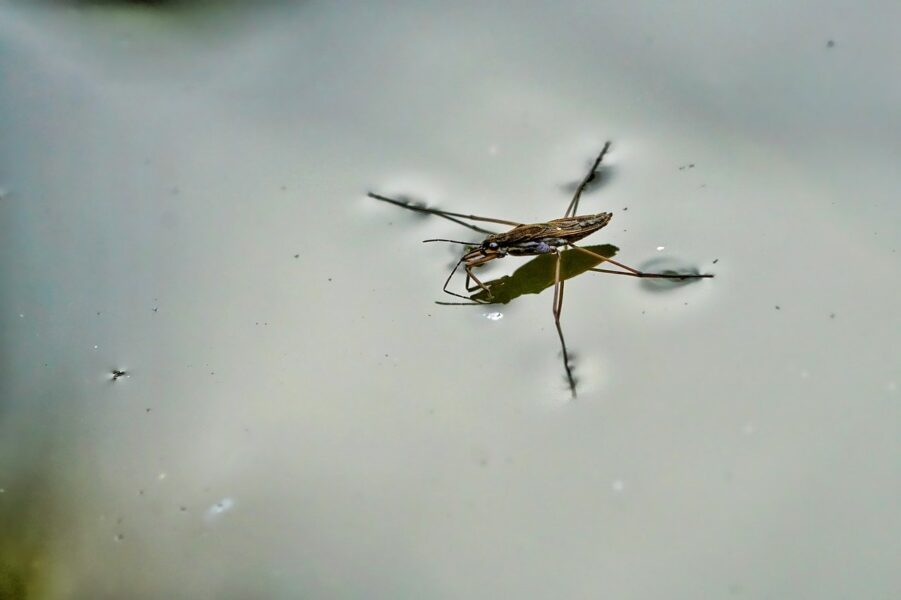 The insect world is filled with weird and impressive animals with under-appreciated abilities. Since they’re so small and short-lived, we often fail to notice their miraculous feats and fascinating lifestyles. This means that we end up missing plenty of true natural wonders. Water striders are a great example.

While biblical accounts of walking on water are considered divine miracles, we hardly notice the elegant little creatures doing this all spring and summer long in ponds, lakes, and rivers all over the world. This week’s Wildlife Spotlight post gets into one of nature’s only true water-walkers and how they do what they do.

There’s more to water striders than performing miracles, though. Like any other animal they have a lifestyle uniquely adapted to their habitats. Let’s dig in and learn more about these everyday wonders.

What are water striders?

Let’s start with the basics. Water striders are insects in the order Hemiptera. While their common name may refer to several distinct groups of insects, the most widespread striders belong to the family Gerridae. Like other insects, they have six legs, three body segments, and often wings (more on that later). As you’re probably familiar, they specialize in a unique mode of locomotion, skating along the water’s surface in ponds, lakes, streams, and rivers.

You can tell water striders from other common insects by their distinctive body shape. Their middle and hind legs are very long and straight, projecting out from the body along the diagonals. Meanwhile, their front legs are short and touch the water’s surface. Their bodies are slender and elongated like a racing shell. Unlike a boat, however, their body sits above the water, and not in it.

Will the real water strider…

Before you really learn to recognize them, it can be easy to confuse water striders with other water-walking insect species. Bugs in the Hydrometridae family, also known as marsh treaders, walk slowly across water rather than skate. They have long, sticklike bodies and all of their legs are about the same length.

The Veliidae or broad-shouldered water striders move like our Gerridae but their legs are typically bent and also more consistent in length. They are thicker around the “shoulders”, so their body is not uniform all along its length.

Finally, the Mesovelidae are shaped a lot more like your average stinkbug or leaf bug. Their legs are relatively even in length, not super long compared to the body, and their bodies are thicker. These little guys are especially common in New Zealand, one of the few places on Earth that you won’t find Gerridae.

Where can you find them?

Water striders hang out in relatively still water in a wide variety of freshwater habitats. Keep an eye out for them along the margins of rivers and streams, especially in pools where the water is moving more slowly. They are also common on lakes and ponds. Since some of them have wings and can fly, water striders can also reach temporary habitats like vernal pools that are only wet for part of the year.

Interestingly, the Gerridae show what’s called polymorphism. This means that within a species, individuals can show different shapes or characteristics. In the case of water striders, females can lay eggs that, when they grow to be adults, can be winged or wingless. When a female lays her eggs in a body of water that might dry up, more of her offspring will have wings so that they can move on if needed.

But water strider’s don’t live exclusively in fresh water. In fact, they are the only insect family that has species which are entirely marine. Although only a handful of more than a thousand species in the Gerridae family can do this, there are marine water striders. They can be found thousands of miles offshore from continents, scavenging dead animal matter and laying their eggs on floating debris.

What do water striders eat?

Bugs in the order Hemiptera, also known as true bugs, have piercing-sucking mouthparts. This means that they need to eat liquid foods. Water striders are predatory Hemipterans, so they drink that liquid from animal prey that they capture (usually, but not always, other insects).

Like other predatory true bugs, they grab hold of animal prey and penetrate its body wall with their mouthparts. Next, like spiders, they inject digestive enzymes into their prey to liquify their insides. They use special pump muscles in their head to drink up the fluid, and discard their prey when finished.

In summary: they stab their victims with their face, turn their innards into a milkshake, and go full Nosferatu. Charming.

How do they catch their prey?

Water striders feed mostly on non-aquatic insects when they fall into the water and get stuck. Have you ever seen a moth, fly, or bee stuck in the water? Not only are they poor swimmers, but the water can weigh their wings down.

Then, they can’t escape the “cling” of the water on their bodies and are helpless. The ripples caused by the struggling insect are like a dinner bell for water striders. They’re highly sensitive to vibrations on the water’s surface, and are quick to attack when they sense food. Using their front legs, which are short and adapted for grabbing, they seize and subdue their prey.

But let’s cut to the chase here. How do these weird animals walk on water? The answer has to do with water chemistry. A special property of water is that its molecules are attracted to one another. This makes water behave almost like a film at its surface. That film is very real, even if it’s super weak. Don’t believe me? Go do a belly flop off of a 6-foot (2m) diving board and then let’s talk.

The water strider secret is that they have perfected the art of standing on top of this film without breaking it. Scientists call this the epipleustonic position; it’s different than floating, since pretty much their whole body is above water. They keep this position by doing three things:

But how do they actually walk on water? Bad news: not really. But, good news: they do something way cooler. Since the water’s surface membrane is slippery, water striders can’t push off to walk like animals on land can. Instead, they use the water to push against itself. Imagine wearing smooth plastic slippers on a huge, oiled-up trampoline. You wouldn’t be able to get enough friction to walk on that surface. But if you were smart like a water strider, you could use the bendiness of the trampoline to your advantage.

Let’s talk about the cheerio effect. Ever noticed how your breakfast cereal tends to clump together if its floating in a lot of milk? This happens because the weight of the individual cheerios (or Froot Loops, or whatever) pulls down on the membrane of the liquid they’re floating in. This makes a little slope, which the other cheerios slide down.

Ultimately, this effect makes the cheerios move toward one another, forming little groups. Water striders use this principle to move. By learning forward, they create a slope in the water membrane. They can then push against this membrane and slide forward.

They can do this remarkably fast, up to a yard (1m) per second! If a human being could skate proportionally fast, they would be going hundreds of miles per hour. Using this same principle, water striders can also jump to avoid predators, pushing off from the water-membrane without breaking it!

Thanks for reading about water striders!!

To learn more about water striders, check out the excellent Nature Guys episode, Water Striders Walk on Water. Do you have a plant or animal species you’d like to learn more about? Let me know in the comments or the contact page!