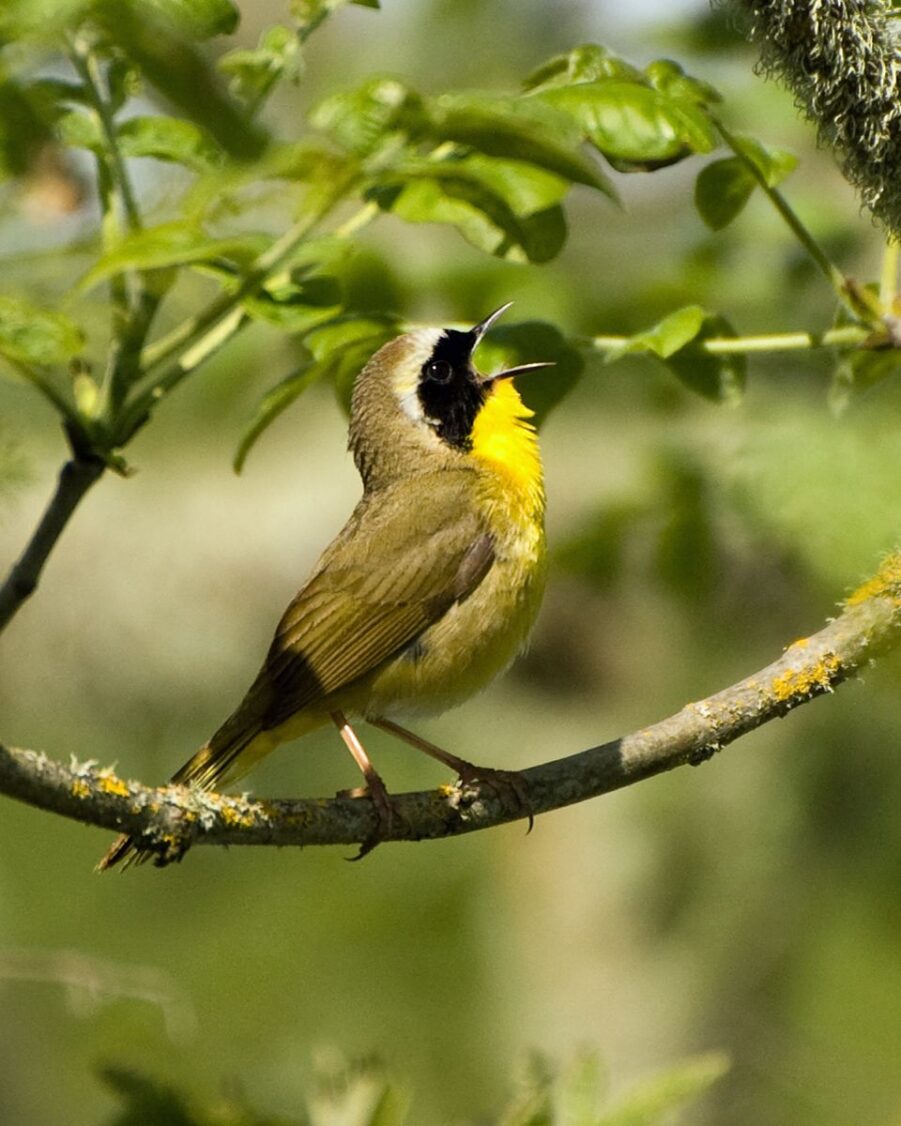 As I write this post, it’s early Spring in Georgia. The relaxing sounds of birdsong drift through my window, providing the perfect backdrop to a quiet afternoon. Eastern bluebird. Northern cardinal. Brown thrasher. Pine warbler. American robin. The different notes and melodies drift in and out of my head while my fingers tap away. I’m feeling relaxed and focused, and experiencing first-hand the topic of this week’s Naturalist Answers post. Like many of us, I’m no stranger to the mood-enhancing and mind-boosting benefits of an avian ambience. But until now, I hadn’t thought to ask the question why.

Why is listening to birdsong so relaxing?

A special shout-out to Erin and Josiah from Indiana who wrote in with this exciting question. Thanks for sending in my first post request!

Josiah and Erin were specifically wondering about one particular explanation that they had heard. The thinking was that because birds stop singing when there are dangerous predators around, that birdsong means safety. That is, for our subconscious. Over thousands of years, this connection with safety has made people feel calm and at peace when they hear birdsong. But is this idea really true? To get to the bottom of it, we’ll need to answer at least three underlying questions:

The benefits of natural sound

So far, the answer to that first question seems to be yes. Researchers from Kings College London published a study in 2018 testing the effects of exposure to nature on mental health. Using an app to track people’s interactions with nature, they showed that birdsong (among other things) improved peoples’ mental well-being. Birdsong was not only relaxing, but made people more deliberate—it reduced what psychologists call impulsivity.

The researchers speculated that birdsong and nature exposure could be a great treatment for several mental illnesses. This is no surprise, though. The medical literature is full of great examples of nature’s positive impacts on health, but those are stories for another blog post.

If anyone knows about the effects of birdsong on people’s minds, it’s Dr. Eleanor Ratcliffe, an environmental psychologist at the University of Surrey in the U.K. People that she surveyed in her earlier work associated birdsong with focus and relaxation. However, their past outdoor experiences involving a particular birdsong affected their perception of these benefits.

If they had previously heard a birdsong while having a nice time outside, they had a more positive reaction to it. For example, some birdsongs reminded people of hiking in the woods as children. People considered harsher bird calls, like those of corvids like magpies, distracting rather than calming and focusing. People who reported feeling a closer connection to nature were more likely to say that they felt the benefits of birdsong.

Dr. Ratcliffe’s research more recently revealed how softer, more complex and melodic (harmonic) birdsong have a more relaxing effect on people. The more frequently birds sang in a recording played for listeners, the more they felt this effect. In other words, people felt their mood and focus most improved by birdsong that had complex harmonies, and that was frequent but not-too-loud.

People have been putting the relaxing effects of birdsong to use in modern spaces for at least a decade. A 2013 BBC article explains how recordings of birdsongs have helped sooth anxious passengers in Amsterdam’s Schiphol airport. Schoolteachers have also played birdsong recordings to help students be more relaxed, awake, and focused after lunch period. So if we’ve been taking advantage of the benefits of birdsong for years, we must know why it’s so helpful, right?

There seem to be two major theories on why people find birdsong so relaxing:

Reading up on this topic, I was surprised at how many people really doubled down on the first theory. Companies offering recordings of nature songs have been especially outspoken that a love for birdsong is in our evolutionary roots. The CEO of one group explained that over thousands of years humans learned that everything is safe and well when birds sing.

According to him, birdsong gives us an intuitive feeling of calm and relaxation. However, when the birds go quiet, we know that something is wrong. So some people definitely claim to have the answer to Josiah and Erin’s question. But does their answer check out?

The instincts of our ancestors?

So is this really the reason why birdsong provides us with mental and emotional benefits? Despite the claims of enthusiastic business owners, there is currently no scientific evidence supporting this claim. Of course, that is not the same as saying that it’s not true. People have linked other human preferences, like our love of being near water, or of open parklands, to our ancient past.

This sort of thing is notoriously hard to prove, though. There is evidence that other mammals eavesdrop on bird vocalizations and can use them to tell if there are predators around. With that in mind, it doesn’t seem like too much of a stretch to think people might have some intuitive grasp of birdsong and its meaning.

It’s possible that both of those theories could be correct. The second one, about the way our brains are wired, lines up with recent research the brain-boosting effects of time in nature. You’ll be hearing more about those in future posts.

So that leaves us one more question for this post:

Do birds stop singing when there’s a threat nearby?

In order for people to have developed an intuitive sense of birdsong’s meaning, it has to first have some meaning. In other words, if birds are singing, does it really mean that things are safe? More specifically, do birds stop singing when there is danger around? The answer is yes, sort of.

A major sticking point here is danger for whom. Are we talking about danger to the birds, or danger to other living things? In my experience in the field, birds will absolutely shut their beaks when they themselves are in danger. If a bird-eating hawk like one from the genus Accipiter shows up, things get quiet real fast.

But in the presence of larger animals that are more likely a threat to someone else, I have found birds to remain quite vocal. The big difference, though, is that they often change from singing to scolding. These harsher calls are easy to tell from songs. In the article I linked above, chipmunks could tell the difference between birdsong and scolding songs and take shelter when they sensed that things were about to get dicey. There’s no doubt that people can do the same.

While walking in Montana, I once followed the sound of scolding robins to find a Great-horned owl (Bubo virginianus) roost! There’s no doubt people in more dangerous environments were equally tuned in for safety reasons. For example, many naturalists in India know that monkeys make a lot of noise when they spot a tiger. Listening to the monkeys is a good way to get a heads up up a potentially dangerous encounter. This came up in a conversation I had with Brooke Mitchell-Norman, the host of the Rewildology podcast, while doing an episode-crossover for Nature Guys.

Want to learn more about birdsong?

Would you like to learn more about birds, their songs, and what they mean? Here’s a quick list of excellent books that I’ve found helpful on the topic:

Thanks for checking out this Naturalist Answers post on the science of birdsong and its effects on people. As always, let me know your thoughts in the comments, and shoot me a message via the Contact page if you’ve got your own question for a future post!