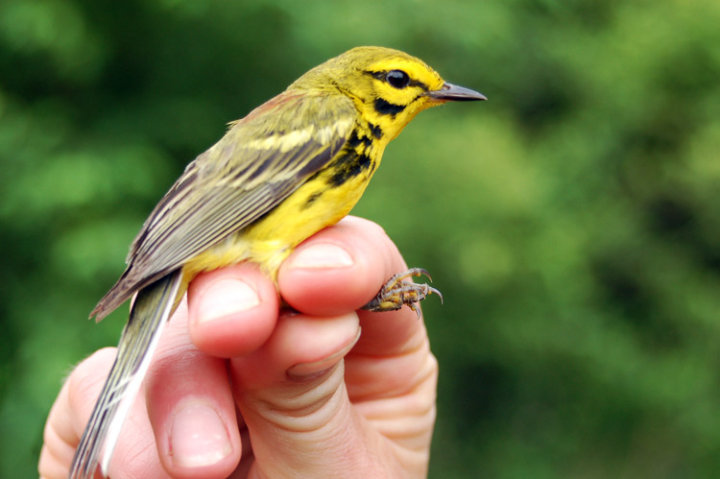 The part of my conservation work that people are most interested in is bird banding. Folks see pictures of me holding gorgeous feathered animals and understandably have a lot of questions. How do you catch them? What are you trying to find out? What do you do to them? Does it hurt? In this Naturalist Answers post, we’ll explore some of these questions. You’ll learn about the purpose and history of this cool naturalist activity and how to get involved.

How does bird banding (or ringing) work?

Bird banding is one of the fundamental research tools in ornithology, the scientific study of birds. If you’re an international reader, you may know it by its name in British English, ringing. The process is relatively simple.

When scientists need to know more about a given group or species of birds, they capture them to collect information. Since individual birds, like other animals, are not always easy to tell apart, researchers need to mark them. For this reason, scientists mark the birds so that they can keep track of individuals. Bird bands are a convenient way to do this, since it is cheap, safe, and simple. They are essentially an anklet that the bird wears, which has certain colors or numbers so that people can tell it from other birds.

Let’s break that down:

There are two major types of bird bands. First, governmental or scientific organizations typically regulate aluminum bands , and have a unique code or identifying number on them. You can only really read these if you have the bird in hand.

Nonetheless, they can be useful if researchers are capturing them repeatedly in different areas. The second popular band type are color bands, which are visible even when the bird isn’t close by. You can spot these with binoculars, enabling researchers to identify birds without catching them. However, color bands often don’t last as long, and can degrade over time and change color.

Banding has a long history, with evidence of its practice as early as 200 B.C.! However, its earliest uses were more directed at communication than research. Texts from over 2,000 years ago suggest that people released crows with strings tied around their legs to act as a long-distance signal. John James Audubon, one of the earliest European-American ornithologists in North America, used threads to keep track of Eastern phoebes (Sayornis phoebe) in Philadelphia during the early 1800’s.

By the 1910’s, the use of aluminum rings much like those used today became popular among researchers throughout much of Europe. The Migratory Bird Treaty Act in the U.S. established government regulations around bird banding in the 1920’s. This act is still one of the most important wildlife protection and regulation acts in the United States.

Why do people band/ring birds?

Long-term bird banding operations have yielded incredible insights into bird migration behavior, population declines and community changes over time, survival rates, and much, much more. A major component of my Ph.D dissertation in Hawai’i, for instance, involved banding and re-sighting birds. This information has continued to contribute to our understanding of how best to manage and protect endangered waterbirds on Oahu.

Such operations are common in many parts of the world, where often amateur ornithologists with great natural history skills conduct citizen science banding operations, collecting valuable data on species diversity, abundance, survival, and migration. Some also provide opportunities for members of the public to learn the “bread and butter” of field ornithology.

When people spot a bird with the same band over time, they learn something about that animal and the life that it’s living. Bird-banding studies have helped scientists and naturalists learn about:

How do people catch birds to band/ring them?

Since most birds can fly, they aren’t the easiest thing in the world to catch. But ornithologists have figured out some brilliant ways of catching them. Although there are quite a few methods, I’ll be focusing one one of them for this post: mist-netting.

Mist-netting is the most common approach for capturing passerines or perching birds, which is one of the most frequently banded groups of birds. The mist-nets themselves involve long horizontal strings of thin, usually black material with “pockets” of finer mesh suspended between them. This fine string, when suspended between two poles or upright objects, can be invisible against a busy background, especially to birds. In the birds’ defense, I have walked face-first into a couple of mist-nets in my day, much to my consternation.

Here’s how it works:

Banders typically set up mist-nets at the edge of a thickly vegetated area. This hides the net by obscuring its image against a complex backdrop. Any birds flying across the open area or out of the vegetated area run into the net. Since it is soft and delicate, it won’t harm them. The birds’ flight is interrupted, and they drop into the “pockets”, which are slack in the fine mesh. They then tangle their feathers or feet, and can’t fly back out.

The banders retrieve the bird by carefully removing it from the mist-net. This involves a lot of skill. To safely remove a bird from a mist net, you need to think like a detective. That is, you need to figure out how the bird may have entered the net. This involves carefully examining how the bird is tangled. Next, you have to free the bird from the net without damaging its feathers or injuring it. This requires knowledge of safe bird handling. If the bird has a strong bill for biting, you may also have to contend with some… discomfort.

Aside from mist-nets, researchers will also use things like have-a-heart traps, drop-nets, and bal-chatri traps to catch birds for banding. Alternatively, they may band birds when they are chicks and less able to escape capture. These methods are generally less common and will vary by species.

What do scientists do once they’ve caught a bird?

One of the first thing people typically do in a research project is band the captured bird. Typically, they do this using a special pair of pliers called ringing or banding pliers. These allow the researcher to open the band, and then close and shape it around the birds’ lower leg (or tarsometatarsus).

Bands come in sizes for specific species of bird so that they don’t restrict the birds’ growth or movement. In terms of weight, they are equivalent to a person wearing a watch. In general, this insures the safety of each banded bird and prevents injury. Banding by experienced handlers doesn’t cause any harm or pain to the bird and takes only a few minutes.

After banding, the research will typically check the birds’ health, and take a number of measurements. These can help determine the birds sex, age, or reproductive status if those aren’t obvious from other cues. For example, you can distinguish the age or sex of some species based on their feather color or plumage. Depending on the research, scientists might also take samples of blood, feathers, tissue, or poop to learn about the birds’ health or physiology.

Scientists carefully record all of this information on each banded bird. They will also record information on the band like its size and any codes it may have.

How can you get involved?

Bird banding is a thrilling way to get hands-on experience with wildlife and contribute to science. However, handling wildlife of any kind requires a lot of experience and special training. Above all, this protects the animals being studied. Because of this, there are strict laws in most countries about the possession and use of mist nets and handling of birds. In the U.S., for example, the migratory bird treaty act forbids the capture of any wild birds without proper permits.

If you’re interested in trying bird banding, the best place to start is with an ongoing banding project. This might first involve watching the process and writing down data, or helping in other ways. Eventually, you can get enough experience to band birds, collect data, or safely extract them from mist-nets. All of this takes time, however, and lots of practice.

For readers that are interested in starting careers in field biology or ornithology, it’s worth knowing that paid opportunities are often available for experienced bird banders. This type of work can get you to neat locations and lead to great professional connections. I started some of my ornithology career as a technician on banding and ornithology projects.

Where can you find bird banding/ringing opportunities?

Local ornithology and bird conservation organizations are typically the best place to start. In fact, these organizations are most often plugged into scientific networks and can connect you to researchers. Generally, long-term banding projects, which monitor population dynamics of birds, are a good bet. These types of projects tend to catch birds in the same places and times. Because of this, volunteer opportunities will be predictable and easy to find.

Here are some organizations that could help connect you with banding opportunities in different parts of the world:

Thanks for reading about bird banding!

Do you have other questions about birdwatching, ornithology, research, or nature careers? Let me know in the comments, or drop a message via the contact form.