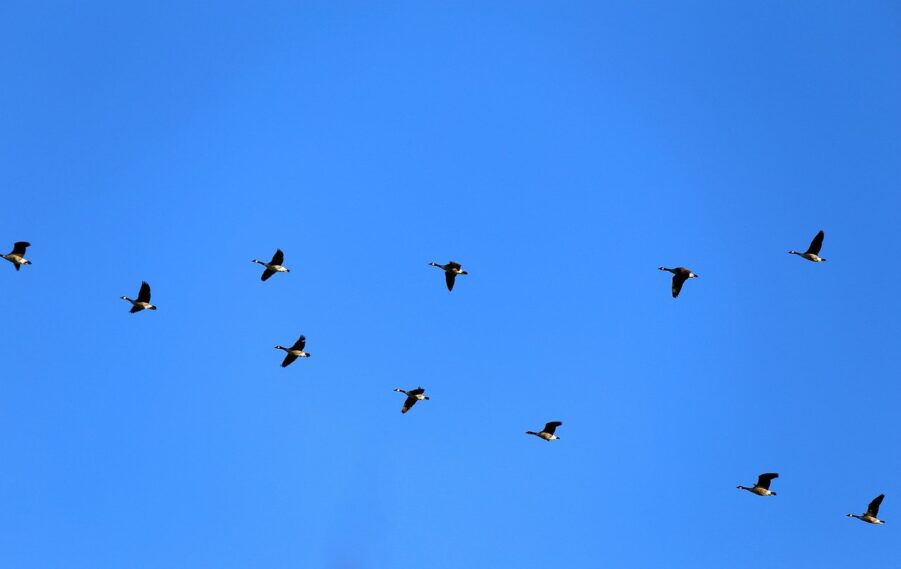 Have you ever looked up at the sound of honking geese or crying gulls to see a big group of birds winging by overhead? Perhaps they’re so close you can hear the air rushing around their wings. The birds may fly in a ‘V’ or check-mark shape, with a sharp point and birds trailing off to either side. These flocking formations are known to ornithologists as echelons.

We might also recognize them as the secret hockey play “The Flying V” from the 90’s sports classic Mighty Ducks.

But aside from scoring the perfect slap shot,

Why do flocks travel in formation?

Flocks on the move are a common sight in Fall and Winter in temperate climates further from the Earth’s equator. With breeding done and out of the way, many animals spend time in larger groups for safety. Larger birds that move long distances on migration or make long daily commutes fly in echelons more often.

Birds that commonly fly in echelons include:

Smaller birds, like songbirds (passerines) don’t tend to form flying V’s. As we’ll see below, this has a lot to do with why birds form echelons in the first place. The air currents generated by smaller birds’ flight patterns are too chaotic to help other birds increase their flight efficiency.

To understand why, its worth getting into some specifics.

What does a V formation do for birds?

There are two major explanations for the advantages of flying in a ‘V’-shaped echelon:

How does flying in a V help birds save energy?

Flying takes a lot of energy, and those energetic costs are greater for birds that have to fly longer distances. It also takes more energy for larger, heavier birds. Because of this, it makes sense that the birds who do it are bigger and move longer distances.

Researchers have estimated that birds that fly in a V can reduce the energy costs of flying by 50%. This increased fuel efficiency meant that they could fly 70% further than birds that were on their own. A study on pelicans also showed that their heart rates were consistently lower when flying in a group. In other words, pelicans didn’t have to work as hard to fly when they flew in a V.

Later in this post, we’ll get into the science of why exactly big birds get these benefits from flying in an echelon.

How else does flying in a V help birds?

Birds that fly in a ‘V’ also have an easier time keeping an eye on one another. During migration and other long moves, staying in a group has major advantages. Birds in larger groups can be safer from predators with more eyes looking for danger. They can also benefit from having more group members’ knowledge of where to find high quality food or a safe place to spend the night.

Keeping the group together, what biologists call group cohesion, is important to getting these benefits. When birds fly in an echelon, they can keep one another in their peripheral vision to stick together. It is also easier for them to hear one another. Many birds use contact calls—short call-and-answer vocalizations to their nearby companions—to stay close to one another. Birds flying in an echelon have an easier time hearing one another’s contact calls and staying in a tightly-knit group.

How does a V formation save energy?

Flight occurs when an object achieves lift, which is when there is higher air pressure below the object than above it. When the forces of lift are stronger than the object’s weight under gravity, the object will fly.

For example, if you blow air at a low angle on a piece of paper, you can get it to fly across a table. Why? Because by blowing air underneath it, you increase the air pressure below the paper until it is higher than the air above the paper. This generates lift that is stronger than the paper’s weight, so it flies!

Birds generate lift for flight by flapping their wings. The unique shape of those wings (which is called an airfoil) generates lift as they move through the air. The air moving across the birds’ wings spirals outward from the wingtips as the bird moves along. Each spiral is a rotating vortex of high and low pressure, almost like the wake of a boat moving through the water.

The air right behind the bird gets pushed downward (low pressure), with air to either side getting pushed upwards (high pressure). If you’re interested in more of the specifics about lift and how airfoils work, check out this great video I found on Youtube.

Just behind and outside of either wing tip, the air spirals turn upward, creating what is known as an upwash. The high air pressure from the upwash provides free lift to any birds that can position its wings on it. This is a lot like surfing on the wake of a boat. Because the boat’s energy has already created the wake, the surfer doesn’t need to push their board along.

When birds position themselves to benefit from the upwash of air from the birds in front of them, it results in the V or J-shaped flock formations. But that’s not all: birds also time their flapping to match the movements of this spiral. This is like walking in someone else’s footprints in the snow. If you space out or time your steps to fall into the tracks that are already there, you don’t have to work as hard.

Because the wing vortexes alternate high and low pressure, a bird flying directly behind another has to flap off-beat from the front bird. In other words, when the front birds wings come down, the back birds wings are coming up. When the birds fly kitty-corner to one another as in the ‘V’ formation, their wingbeats are synchronized such that all of their wings flap downward at the same time.

How do birds decide who is in front?

In the past, people generally thought that the birds at the lead of a formation were older or more experienced individuals. There isn’t much evidence to support this yet. What has been studied, though, is that birds change place frequently within the echelon. Research has shown that individual geese in a flock may spend as much as ⅓ of their time in the lead position. They also frequently changed position in the echelon, as often as once per minute as they flew!

It’s more tiring to be the bird in the front, since they don’t benefit from the upwash of any birds in front of them. This is probably why no bird is consistently in the front for long flights. Everyone shares the load! When a lead bird gets tired, it will drop to another part of the echelon to rest.

Why are there sometimes more birds on one side of the V than the other?

When the breeze is blowing across or oblique to the birds flight path, it affects the air coming off of their wings. The vortex going into the wind is made weaker and shortened, while the one going with the wind becomes longer. This may make it easier for birds on that side to surf the upwash and save energy. In this way, one side of the V may be longer because its a better place for birds to find the benefits of an echelon formation in the first place!

Thanks for reading about why birds fly in a V!

What other nature questions have you scratching your head lately? Let me know in the comments or send a message through the contact page!