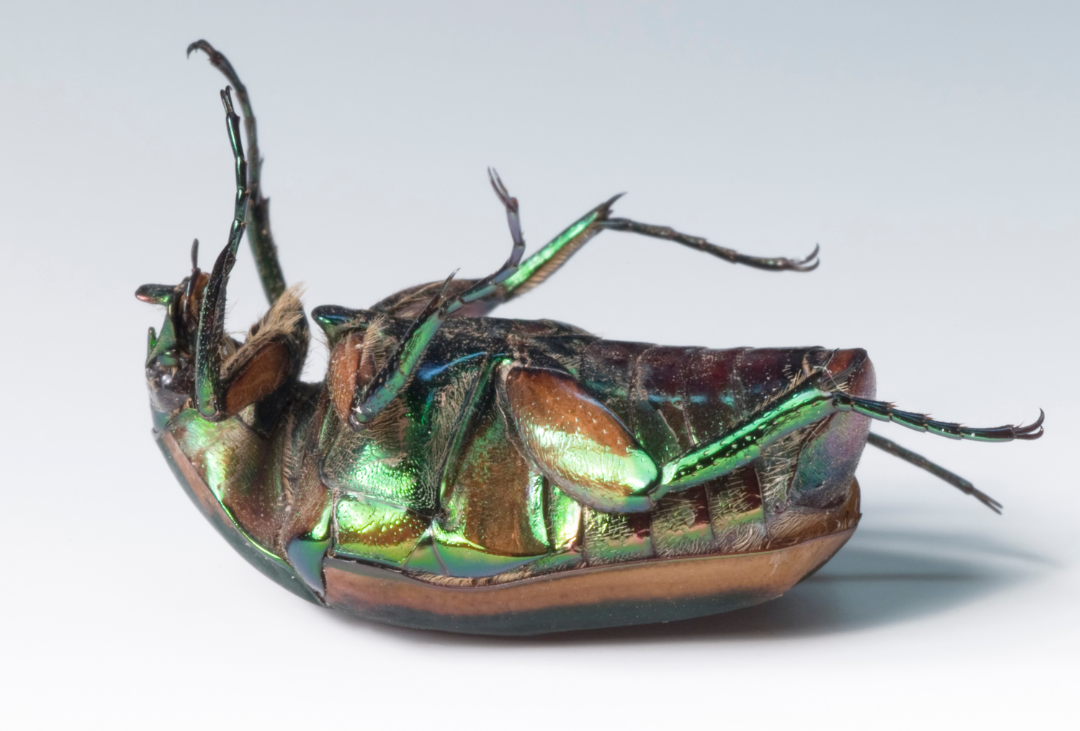 People often uses phrases like “going belly up” to describe dead or dying things. The idea of dead animals with legs sticking up in the air seems especially iconic for insects. For instance, exterminator companies’ logos will often feature a dead bug on its back with its feet high in the air. Furthermore, “dead bugs” are a popular abdominal exercise. That position seems to be a key aspect of how insects give up the ghost. But why do bugs die on their backs?

In this Naturalist Answers post, we’ll explore the science behind this weird pattern.

One of the biggest factors involved is that most insects are pretty top-heavy. Or perhaps more appropriately, back-heavy? In other words, the side of their body that faces up, what scientists call the dorsal surface, is typically heavier than the part below. Insects’ legs don’t weigh a whole lot.

Meanwhile, things like internal organs, wings, and wing-cases, weigh considerably more and are more toward the back. This means that if a bug isn’t controlling its posture using its leg muscles, it may easily tip over onto it’s back.

In fact, you can test this out at home, provided you aren’t too easily grossed out. If you find a dead insect that is safe to handle, try nudging it with your finger or a stick. Alternatively, you could lift it up and drop it onto a flat surface a few times. You may notice that some bugs fall more often onto their backs due to their weight distribution.

While this isn’t the only factor, insects’ natural weight distribution does make them more likely to “go belly up” when they die.

The way that bugs die can also make them more likely to end up on their backs. The “neutral” or relaxed position of insects’ legs is curled inwards. In other words, to make them straight and keep them supporting the body, the insect has to flex its muscles.

If you want to experience a similar neutral position yourself, lay the back of your hand flat on a desk or table. You’ll notice that, rather than flatten out against the surface, your fingers curl slightly inward and upward. It takes muscular effort to straighten and extend them. This is the same idea!

When bugs die, the pressure created by their “blood” (called haemolymph) leaves their legs, making them curl inward to their neutral position. This motion can apparently cause them to flip on their backs.

The role of pesticides

Another factor affecting bugs’ muscles is how they actually die. Many pesticides and insecticides, when digested by insects, cause muscular spasms. This means that their muscles contract and extend without any coordination, often violently. These contractions can flip the insect over onto its back, where it may be in serious trouble. Read more below.

Because insects are so back-heavy, lying flat on their back can be a dangerous position. Many healthy bugs have special methods for flipping themselves back over. By contrast, bugs that have ingested poisons or are already weakened for some other reason may not have the strength. This means that they’re stuck, helpless and unable to move. At that point, it’s curtains for the insect. They will probably die in that position, and that’s how we’ll find them.

Thanks for reading why bugs die on their backs!

Do you have more questions about bugs or natural history in general? Let me know in the comments or using the Contact page. And go check out some dead bugs in your neck of the woods!