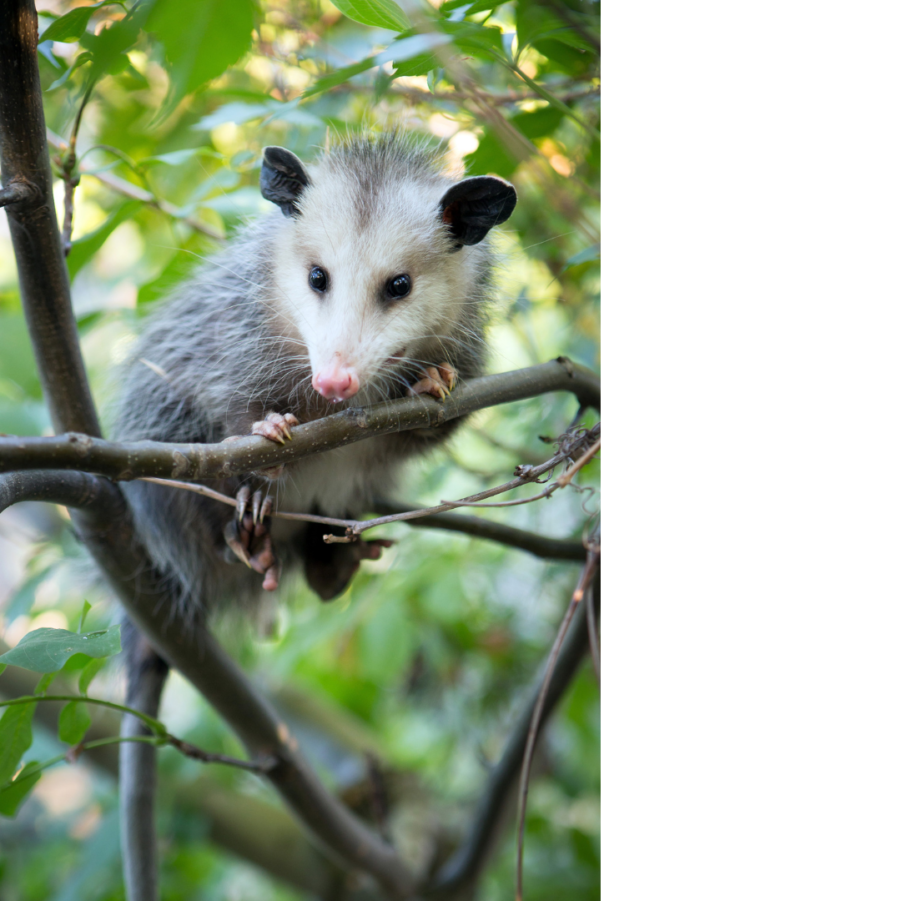 In this Wildlife Spotlight post, I’d like to put in a good word for an animal that people see all the time but tend to misjudge: the Virginia opossum (Didelphis virginiana). These cat-sized, fuzzy, long-whiskered beasts tend to have a polarizing effect on people. Everyone seems to think they’re either hideous or adorable. They have a reputation for being dim-witted, slow, and dirty. But are any of those things true? Let’s find out, and get to know this North American neighborhood critter.

Let’s start with some opossum basics. Opossums are nocturnal, meaning that they are most active at night. They are also omnivorous: they can eat a wide variety of foods. This includes things like insects, fruits, small mammals, and scavenged carrion (dead stuff). Opossums are great at hiding during the day. Typically, they will find tree hollows or abandoned burrows to shelter during daylight hours. Not being very talented diggers, opossums tend to use the abandoned homes of other animals.

These adaptable qualities make opossums excellent living around people. Around human habitations, they can take shelter under sheds and porches, or even indoors if they get the chance. I’ve heard plenty of stories about opossums coming into people’s houses through cat-doors and moving right in. In urban and suburban environments, they also eat trash and extra animal food if it’s left outside.

Opossums are active year-round. That is, they don’t hibernate like many other mammals, and are very active looking for food on winter nights. Unlike many other mammals, their extremities have no fur. Their naked toes, tail, and ears can become a liability in cold weather. In short, their little toesies can get cold! Frostbite is a major limiting factor in the species’ distribution, the geographical range over which they are found. At the Northern edge of their range, in Canada, they often have short tails from damage due to frostbite.

These critters have to get a lot done in their busy nocturnal lives. The average life span of an opossum is only 1-2 years! Fortunately, their population is balanced out by high rates of reproduction. Female opossums can have multiple litters of joeys (yes, they’re called joeys) per year. Furthermore, those litters can have up to twenty babies at a time!

You’ve probably heard people call this animal a possum rather than an opossum. Some wildlife know-it-alls will be quick to correct people: “Actually, those are two completely different animals!” Of course, those folks are referring to mammals in the suborder Phalangeriformes or the smaller family Phalangeridae. These are neat, mostly tree-climbing mammals endemic to Australia and New Zealand. These are more commonly known as possums nowadays.

However, as we learned in my post on scientific names, common names like possum and opossum aren’t standardized. As long as we’re still talking about Didelphis virginiana, it doesn’t matter what common name you apply. There’s nothing wrong with calling them possum, so don’t let the nerds bully you. Secondly, both “possum” and “opossum” come from an indigenous American word for our Virginia opossum. The best accounts I can find say that the word comes from a Powhatan word, aposoum. This, in turn, came from a Proto-Algonquin root, wapathemwa. People claim that this means something like “white animal” or “white head”, but I haven’t found any proof for it.

European colonizers reached Australia more than a hundred years after learning about opossums in North America. Their naturalists applied the same name to dozens of somewhat similar Australian mammals, and the name was shortened to possum. So, the origin of the name is the same, and it’s not important anyway. Possum, opossum, tomato, o-tomato.

On the weird side

Even if opossums don’t freak you out, you have to admit that they are pretty strange. By all accounts, they don’t look much like any other fuzzy beast you’ll come across in Europe and North America. This made them a major curiosity to European colonizers early in their settlement of what is now the United States. Captain John Smith, a prominent leader in the New England colonies, supposedly sent this description back to Europe:

“An Opassom hath an head like a Swine, and a taile like a Rat, and is of the bignes of a Cat. Under her belly she hath a bagge, wherein she lodgeth, carrieth, and sucketh her young.”

We’ll get to the “bagge” later, but this shows just how unusual opossums are compared to other North American mammals. European colonists were totally baffled by these strange critters.

Opossums have some pretty unusual claims to fame:

Weird for a reason

Much of this weirdness is because opossums are more distantly related to other mammals in North America than other species. When species come from a very different ancestor group than other species around them, they tend to stick out. Opossums are the only marsupial native to the U.S. and Canada. This ancient group of mammals shared our planet with dinosaurs during the cretaceous period. Marsupials likely diverged from placental mammals (including people) as much as 120 million years ago. That’s between 5 and 35 million years earlier than our ancestors branched off from the ancestors of dogs. In short, that’s a lot of time for some major differences.

The most glaring difference between marsupials and our relatives the placental mammals is how we carry our babies. Placental mammals like humans, dogs, cats, or squirrels, carry their babies inside their bodies for a long time. This gestation period allows time for the baby to grow large enough to survive outside conditions moderately well. Mothers provide their young with nutrients through a body called the placenta which acts a mediator between mother and baby.

Marsupials do it different. Their gestation periods are really quick. To be precise, opossum mamas are pregnant for less than two weeks. The newborns are about the size of a honeybee and look a lot like weird gummi bears. Next, the tiny babies crawl to the mother’s pouch, or marsupium—another distinctive characteristic of marsupials. There, they will latch onto one of her thirteen nipples to nurse and grow for the next two months. After that, they will hang out with mom for another 3 months or so. Typically, they’ll hitch a ride on her back, clinging to her fur. Finally, they will go off on their own, to live the weird, mostly solitary life of an opossum.

The one topic that always comes up when I chat with people about opossums is their ability to play dead. Specifically, opossums will literally pass out when harassed or threatened repeatedly. Their breathing and heart rate reduce considerably (by as much as half), their eyes and mouth gape open. They go rigid and put off an awful-smelling greenish goo from their rear-ends. The general thinking around this weird behavior, called thanatosis, is that it’s repulsive to predators. Who wants to eat a stinky rotten dead opossum?

Interestingly, thanatosis is not so much a special ability as a genetic quirk. You could even call it a condition. That is, opossums don’t deliberately play opossum; it’s part of their body’s natural response to extreme stress. In other words, they can’t control it, it just happens! Nonetheless, if it kept enough opossums from getting eaten over time, it would become one of their basic survival traits.

Of course, playing dead is not the best strategy for more modern threats. One of the most common places to find opossums is dead on the side of the road. If they get stressed or frightened when crossing a road, thanatosis can set in and leave them vulnerable to being run over.

I saw an opossum in my yard. What do I do?

Opossums are a common sight in suburban neighborhoods. This is because these areas provide lots of places to hide and extra food sources like pet dishes and garbage. Nearly all of my opossum experiences have been in settings like these. People often ask me what they should do if there’s an opossum in their yard. My answer is usually, “nothing”. Opossums are among the more harmless animals that turn up in back yards. They carry surprisingly few diseases, and are extremely unlikely to have rabies. Although they will put on a big show if they’re scared, they are more likely to play dead than bite. I have seen plenty of opossums make good “friends” with cats in suburban neighborhoods. That being said, it is always best to keep your pets away from wild animals of any kind.

Opossums also perform some valuable services in back yards. Their highly varied diets mean that they consume all kinds of pests. They’ll eat slugs, snails, grubs, and other plant-munching invertebrates, and rotten fruit or veggies if they’re stinking up the place. But here’s the kicker: opossums are major tick-eaters. If you’re trying to stay safe from Lyme disease or other tick-borne illnesses, these shuffling, beady-eyed weirdos have your back. Opossums groom themselves frequently and thoroughly, just like a cat. Their trundling, wandering ways and thick fur tend to make them tick magnets. By stopping often to groom and—you guessed it—eating every tick they find, they can put away 5000 ticks in a summer!

Opossums may be great to have in your yard, but you may not want one in your house. If you do have a problem possum, it should be pretty easy to deal with. Generally, opossums are very food motivated and easy to catch in simple cat-traps. These baited traps are cages with a door that releases when an animal steps on a panel. A wildlife expert or animal control agent will use this type of baited trap to capture your uninvited guest. Then, they can transport it somewhere else for a safe release.