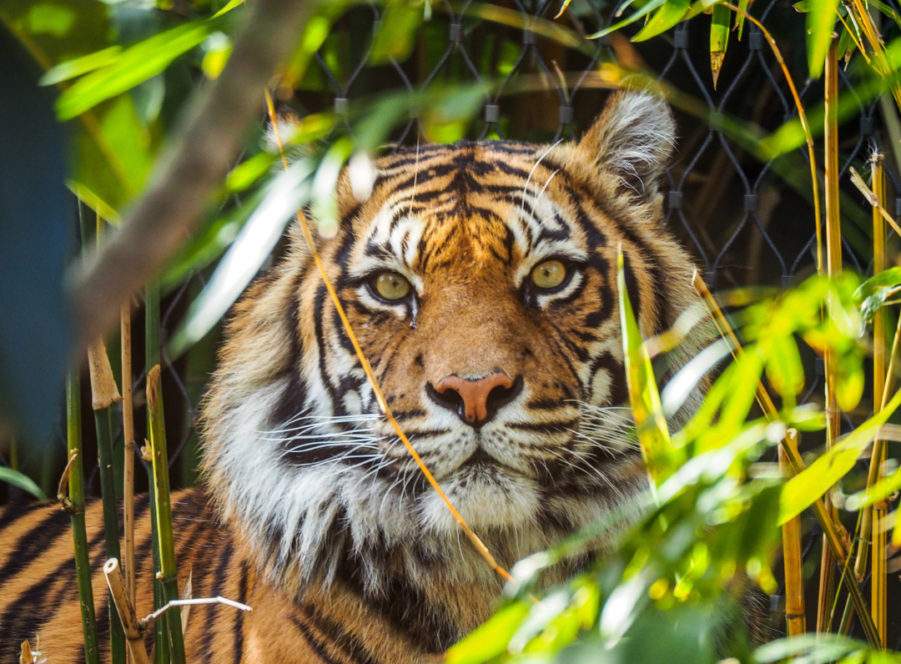 With their terrific strength, mysterious nature, and stunning beauty, tigers have fascinated people for thousands of years. These incredible predators are the epitome of wild, and inspire awe and admiration worldwide. But how well do you really know tigers? With this Wildlife Spotlight post, you can become a tiger superfan by learning these 18 awesome tiger facts.

1. Their orange color is invisible to deer

Although tigers’ orange color seems obvious to us, it is the exact opposite for their prey. Primates like us humans can see a whole range of colors, while animals like deer see fewer hues.

Deer can’t easily distinguish reddish and greenish colors, meaning that orange tigers blend in perfectly with the green of their surrounding vegetation. This can give them incredible camouflage for sneaking up on larger hoofed mammals, their preferred prey. As far as their main targets are concerned, tigers might as well be green!

Although tigers are listed as endangered throughout the world, 2022 brought welcome news to conservationists. Recent population counts by conservation organizations in India and Nepal indicate increases of as much as 40% across several continental tiger populations.

This is great news for conservation organizations who have worked hard in recent decades to protect these imperiled cats. However, the hard work isn’t over. We have a long way to go to ensure a safe future for tigers and preserve them for future generations.

3. They have their own holiday

That’s right! July 29th of every year is Global or International Tiger Day. This holiday celebrates tigers to raise awareness for their environmental plight and the urgent need for their conservation.

Conservation leaders celebrated the first international tiger day in 2010 when planning an international, coordinated effort to halt steep declines in tiger populations throughout their range.

4. There are two “official” subspecies of tiger

The scientific name of tigers as a species is Panthera tigris. However, since tigers live in many different parts of Asia, they have also been divided into two smaller groups. These are:

The earliest evidence of tigers dates back more than 2 million years, based on fossil evidence discovered in China. The Longdan tiger (Panthera zdanskyi) is likely modern tigers’ ancient ancestor. Slightly smaller than modern tigers, the Longdan may have existed at a time when available prey were smaller.

6. Their bite force is a half-ton of pressure

Yikes! Tigers have one of the strongest bites of any animal in the world, especially among mammals. Their jaws can generate 1,050 p.s.i., about half a ton (476kg) of force. This is about double the bite force of a lion!

7. Tigers love hanging out in water

When it comes to cat stereotypes, tigers break the mold. These ginormous kitties have no fear at all of getting wet. In fact, they seem to prefer wetland habitats.

Especially at hot times of year, tigers spend a lot of time lounging around in ponds, rivers, lagoons, and swamps. They even have webbed toes which make them excellent swimmers!

Weighing in at up to 670lb (303kg) for the continental subspecies, tigers take first place for most massive cat on Earth. At 310lb (140kg) for island subspecies, the smaller subspecies of tigers aren’t exactly miniatures, either. Tigers are a serious predator!

9. They don’t just live in jungles

Although we love imagining tigers as lurking in dense jungle, they actually use a huge variety of habitats. This is because their broad distribution throughout Asia covers several biomes, or ecological regions. Among these, tigers occur in:

10. Tigers can make noises that are too low for human ears

Here’s one of the more mind-blowing tiger facts. Much like elephants, tigers can vocalize in pitches that are so low that our ears can’t pick up the sound. They can generate this infrasound because their vocal chords and voiceboxes are shaped differently than hours.

Fascinatingly, some scientists think that tigers can use their ultra-low voice to confuse and frighten prey into freezing. This gives them the momentary chance they need to move in for the kill!

Tigers are what is known as apex predator in their food web. By eating large plant-eating mammals, they keep their populations in check, protecting plant communities. These impacts cascade down the food chain and influence whole ecosystems.

This makes tigers a keystone species, which means that play a big role in maintaining the habitats in which they live. If tigers were to disappear, it would have widespread harmful impacts on the surrounding environment.

12. They have lost about 95% of their historical range

Tigers are an endangered species. By hunting tigers for medicines and products that use their body parts, and destroying their habitats, people nearly wiped tigers out in the last century. Tigers now occupy only 5% of the original habitat that they once occupied.

This means that they have completely disappeared from the vast majority of their former range. It is critically important that we protect tigers in the few places where they do remain. One major priority is finding ways for humans and tigers to coexist so that protecting tigers doesn’t mean displacing people from their ancestral lands.

13. Tiger moms use their ears to signal to cubs

It’s a dangerous world out there for a tiger cub, with roughly 50% of young seeing their third year of life. To help keep their babies safe, tiger mamas use the white patches on their ears like signaling flags.

Tiger cubs cue in on the position of their mothers’ ears and will crouch down and hide if she shows any sign of threat or danger. This helps mother tigers coordinate with their offspring to keep them safe.

14. There are more captive tigers than wild ones

People are crazy about tigers. Unfortunately, between our fascination with tigers and our destruction of their wild habitats, there are now more tigers in captivity than out in nature.

You heard that right. There are more tigers in zoos and private collections than in their native habitats. In fact, between the U.S. and China, there may be as 10,000 or more captive tigers. Compare that to the latest estimates of 4,500 wild tigers, we have more than twice as many tigers on display than we have in Earth’s ecosystems.

Although this is a scary and sobering thought, it’s yet another reason that tigers deserve our care and support.

15. Their skin is as striped as their fur!

Tigers are well known for the beautiful striped patterns on their coats. Fascinatingly, that same pattern is actually imprinted on their skin. Just like people, tigers’ individual hair follicles can have different amounts of melanin, a common pigment in mammals.

This same pigment makes some peoples’ skin or hair darker than others. In the case of tigers, the skin cells and hair follicles associated with their black stripes are, themselves, black with melanin. This means that you’d see an identical stripe pattern on a tiger with no fur!

16. India has more than half of the world’s wild tigers

Although there are only a few thousand wild tigers left, the vast majority of them are Bengal tigers in the Indian subcontinent. This makes conservation efforts in India especially important to keeping tigers around!

Here’s one for weird tiger facts. Many animals what are known as “nouns of plurality”. For example, a gaggle of geese or a murder of crows. A group of tigers, meanwhile, has the colorful names of streak and ambush. Pretty evocative, right?

18. Tigers need around 1 kill per week

A large deer, pig, or other prey animal can typically feed a tiger for about a week. They hide larger prey items or cover them with leaves to prevent other animals from stealing them. Then, the tiger comes back throughout the week to snack.

Although it doesn’t sound like much, this means that a single tiger can consume 50-60 large mammals per year. That’s a big impact! That also means that if humans displace wildlife by developing land, we can quickly starve the tigers out.

I hope you liked this collection of bizarre and fascinating tiger facts! If you’d like to learn more, check out my recommendations for podcast episodes and good reads on tigers and their conservation.

Among Tigers: Fighting to Bring Back Asia’s Big Cats by Ullas Karanth

Tigers of the World: The Science, Politics, and Conservation of Panthera tigris by Ronald Tilson and Philip Nyhus

Thanks for reading tiger facts!

Are you a tiger superfan? What were your favorite tiger facts? Have you ever seen one in the wild? Share with us in the comments! If you have another wildlife species you’d like highlighted in Wildlife Spotlight, let us know via the Contact page.