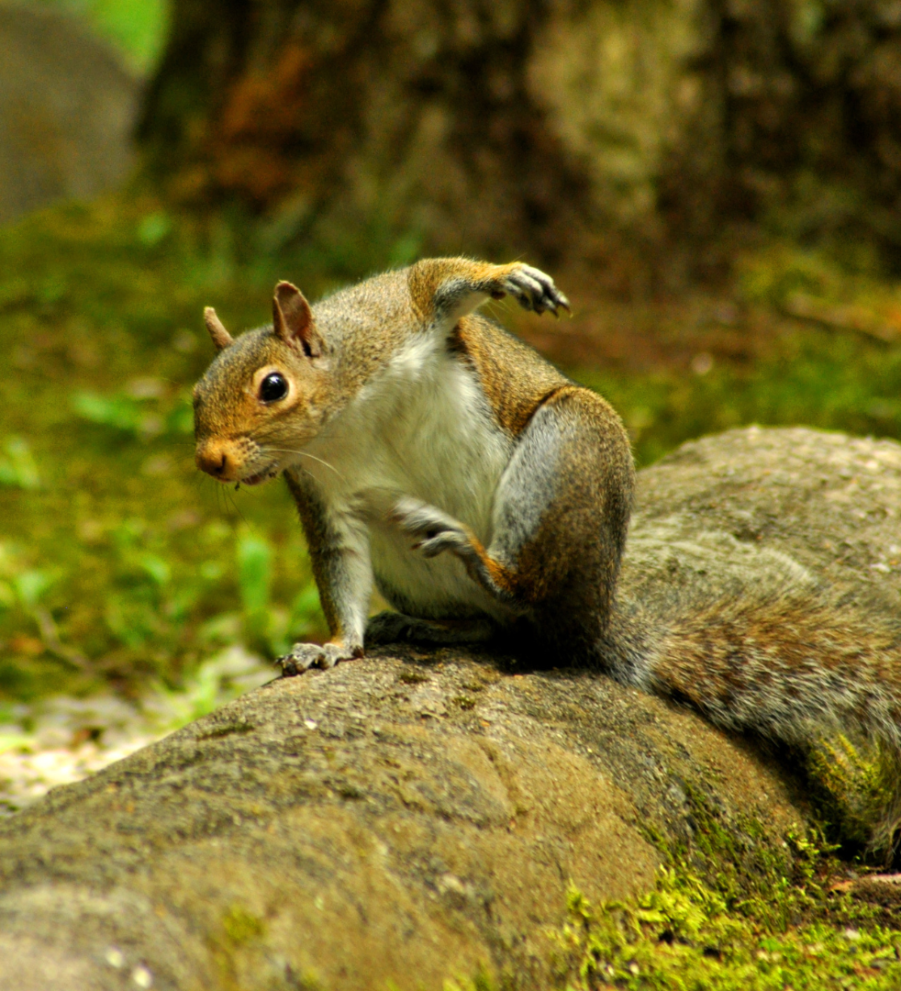 In Fall 2020, some viral photos seemed to imply that our friendly neighborhood squirrels have some superhero flair. The pictures showed squirrels in the same super-cool pose that action movie stars use for dramatic landings. “The Superhero Landing” as wisecracking Marvel superhero Deadpool calls it, is iconic cool, and apparently our fuzzy tree-climbing neighbors are in on the swagger. But do squirrels really land like superheroes?

In this Biologist Ruins Everything post, we’ll explore squirrel behavior and put this weird wildlife myth to the test.

These photos of squirrel superhero landings certainly look convincing, but they raise some immediate questions. For example:

Looking at squirrel “superhero landing” photos, I can’t help but notice that many of them have one foot raised. In most of them, the foot is also blurry, like it was moving rapidly when the picture was taken. What would a squirrel be doing moving its foot around quickly?

If you have a dog, cat, or hamster, you might have seen them move their back feet rapidly to scratch themselves. Just like us, when an animal has an itch, there’s only one thing to do: scratch it. This actually plays a valuable role in grooming, removing parasites, and keeping their skin, hair, or feathers healthy.

Many four-legged animals use their hind legs to scratch most parts of the body, and their front legs to groom their face and neck. The blurry, raised hind feet of the squirrels in these “superhero landing” photos give it away:

All of these are actually just photos of itchy squirrels having a good scratch.

Animals are more likely to scratch and groom when they are calm and relaxed. Thus, rather than being dramatic action shots, all of these photos actually depict squirrels that were just chillaxing.

The forelegs (or “arms”)

The most important part of the superhero landing pose is the dramatic flair of having one arm raised up and one planted on the ground. How does scratching explain where the squirrels put their fuzzy little “arms”? Actually, it’s the scratching again.

The squirrels in these various photos are scratching their bellies or armpits. With short little front legs, this isn’t something they can do easily. So they raise one “arm” to get access to the itchy spot, use the other arm for support, and scratch away with a back leg. This makes the perfect superhero landing pose!

How do squirrels actually land?

The rather disappointing truth that squirrels do not, in fact, land like superheroes, raises another question. If all of these squirrels were just scratching, how do they actually land when they fall?

Adorably, their method of landing is much less elegant and stylish than the superhero landing. I call it “the splat”. When in a controlled fall, squirrels will spread their limbs out wide to increase air resistance and hit the ground like a bushy-tailed pancake. This helps spread the force of the impact over a greater area to prevent injury.

Furthermore, if they don’t fall onto anything sharp or a hard surface like concrete, they’ll probably be fine! Here’s a real video of a squirrel falling from a tree:

As you can see, it’s much less intimidating than the superhero landing. Especially the “plop” sound. However that’s not to say that squirrels are the laughing stock of the animal kingdom!

Even though squirrels don’t do the superhero landing, they do have several fantastic superpowers. Here are just a few:

Even though squirrels don’t land like superheroes, I hope you still learned some of the many things that make them amazing animals. Share your coolest squirrel stories in the comments, or let us know what other wildlife myth you’d like busted using the Contact page!