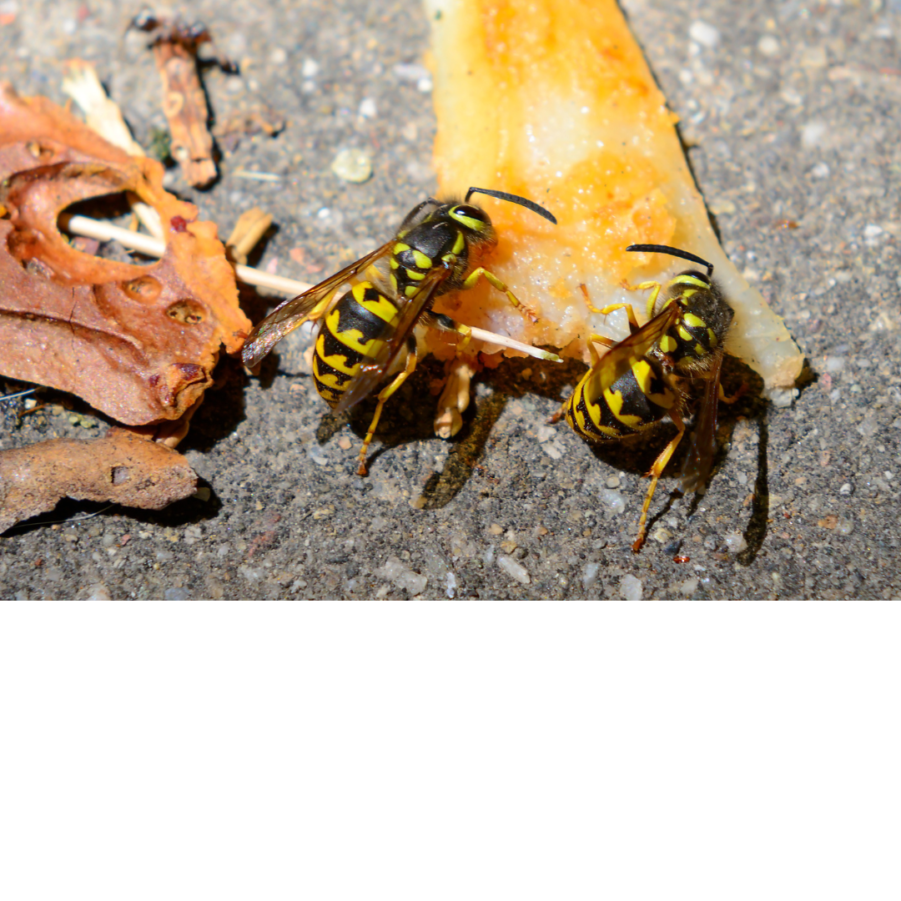 By the time Fall comes around, people are too ready to leave the mosquitoes behind and enjoy the cooler weather. Too often on my own Fall picnics, I’ve been about to enjoy a candied apple or cup of cider when the wasps show up. They aggressively harass my friends and I until, begrudgingly, we head inside and mumble about how “the wasps are bad this year”. Is there any science behind this phenomenon? Are wasps more aggressive in the Fall?

A great first step in answering this question is getting to know the usual suspects. Where there are loads of insect species in the world, only a select few are likely to ruin your Fall picnic.

Aggressive wasps in fall: the culprit

In Europe, the U.K., and North America, the major picnic-crasher are wasps in the genus Vespula. Americans know these insects as yellowjackets. There are several widespread yellowjacket species in North America:

You might encounter some similar-looking species that are less likely to bother you, including:

These other species are much less likely to bother you at a picnic. They might be attracted to sources of sugar or water (or both—think cider, beer, or a juicebox!). However, they are generally less interested in human foods. Yellowjackets, on the other hand are a different story.

The Role of Diet in wasps being aggressive in the Fall

Unlike bees, wasps raise their young on animal protein. In other words, rather than making honey or other rich foods from pollen and nectar, they typically hunt for a living. While many wasps exclusively hunt insects, yellowjackets also find protein-rich foods by scavenging dead animals. Compared to other wasp species, they have a big diet and are willing to eat all kinds of animal foods, living or dead.

This broader diet and interest in proteins and fats is a big part of why we encounter wasps more often in the Fall. Specifically, it means that they are interested in our foods, things like sandwiches and charcuterie meats. To the wasps, these foods resemble carcasses of dead animals that they can forage upon. In other words: free protein sources to feed their growing colony.

Unlike honeybees, who can protect and maintain a whole colony in their hives over winter, only queen wasps survive into each Spring. That means that each year, they have to start from scratch, building up their numbers during the warm seasons.

It takes a queen the entire Spring and Summer to build a bustling new wasp nest. She does this one brood of babies at a time. Of course, she can pick up the pace once she has some adult workers around to help hunt for food.

By the time we are enjoying pumpkin spiced lattes, these colonies have reached their peak. The wasps themselves are at their highest numbers. This means that more wasps are more active and hunting food for more babies. The result? A lot more potential for uninvited guests!

At the same time, food supplies are lower. There are fewer active insects for the wasp workers to hunt. Secondly, there are fewer actively flowering plants offering a nectar snack as the weather gets cool. This makes wasps more likely to run across people as they seek access to our foods, which are abundant at picnics and barbecues.

As they stop reproducing, wasps also seek out sugary foods rather than protein-rich sources, making them more attracted to sugary drinks like sodas and beer that we are likely to be enjoying outside. All of this means more wasps coming into contact with more people, which inevitably leads to more wasp stings.

Getting stung by yellowjackets is no fun. Unlike many bees that get their stingers stuck after stinging, wasps can sting repeatedly. In other words, one bad encounter with a yellowjacket can lead to a number of stings.

Furthermore, wasp stings can be dangerous and potentially lethal if people are allergic. Around 50-60 people a year may die from wasp stings in the U.S. Consequently, it’s always good to take precautions and be aware if anyone in your party has a known bee allergy.

Thanks for reading about why wasps are aggressive in the Fall!

I hope you found the answers you needed in this Naturalist Answers post. As always, please let me know your thoughts in the comments section below, or via the Contact form. Until next time!