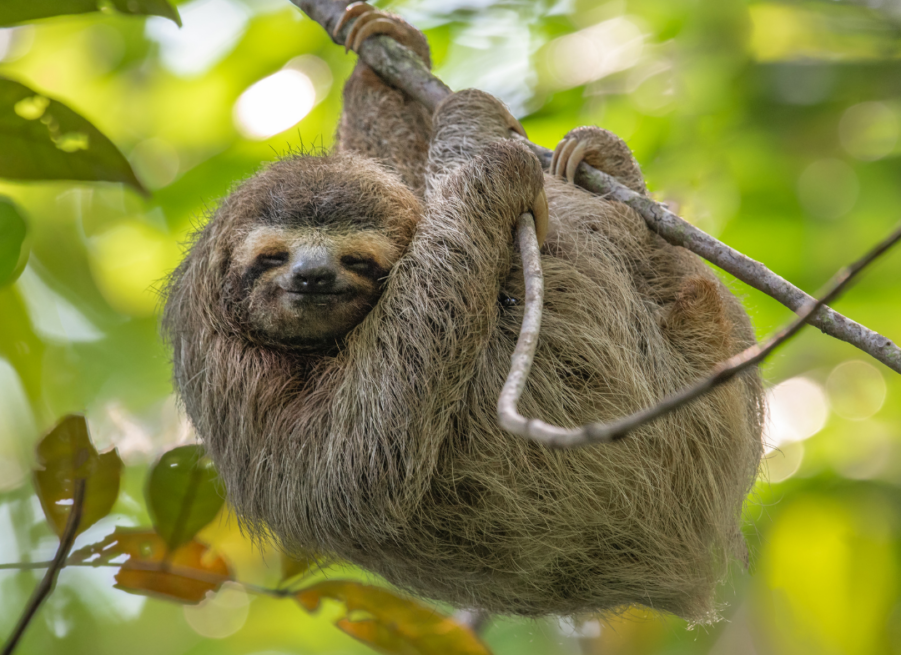 Sloths are increasingly receiving much-deserved attention and love from animal lovers across the internet. Their odd brand of cuteness, peaceful lifestyles, and exceedingly leafy diets seem to have won many hearts. Sloths are getting a lot of attention, from Youtube channels to types of Pokémon. And sloths need all of the attention that they can get! Two of the six sloth species on Earth have endangered species status, and deforestation is a threat to all of them. Of course, a central theme in the general affection for sloths is their sluggish nature. But why are sloths so slow? Let’s dig into that question in this Naturalist Answers post.

For example, let’s say I fell and scraped my knee while playing with my friend’s 4-year-old. The 4-year-old might ask, “why is your knee bleeding?”. A proximate answer might be “because I tripped and fell, and the pavement is hard and abrasive.” Or perhaps, “because my knee hit the pavement real hard.” On the other hand, a more ultimate explanation might be “because I was running around too fast and didn’t look where I was going.” Or, “because I’m clumsy”.

Turns out, we can approach “why are sloths slow?” the same way. So what are some proximate reasons why sloths are so slow?

Sloths are arboreal, which means they spend most of their time in trees. In fact, they typically only come down to the ground to poop. That kind of lifestyle high in the trees, combined with their very poor eyesight, means that small mistakes could be fatal. Specifically, if they miss a branch or vine in their climbing, the resulting fall might spell the end.

Sloths have rod monochromatism, meaning that their eyes only have rod photoreceptor cells. This gives them poor color version and not particularly good definition. In other words, images don’t appear very clear to them. By contrast, fast-moving arboreal animals like many monkeys, lemurs, and Clouded leopards (Neofelis nebulosa) have excellent vision. For sloths, moving slowly may be their only option as they move about high in the tropical rainforest canopy.

They’re not capable of going fast

Ok, so this one sounds a bit like circular reasoning, but it’s true. Why are sloths so slow? Because they physically can’t go fast. Sloths bodies operate very slowly. Their metabolism, the rate at which their cells turn food into energy, is super slow. You can think of them as the opposite of a Ferrari. In other words, a super slow, low-performance vehicle.

On the plus side, that vehicle has really high fuel efficiency. By sacrificing speed, power, and acceleration, it can go a long time on a full tank. And indeed that’s what sloths do! They actually can’t produce the energy to move fast with their low-performance motors, but they can go a long way on a small amount of food. But we’ll touch more on that later.

Tied into their slow metabolism, sloths also have drastically reduced musculature. In fact, this is part of how they achieve such a slow metabolism. Muscle mass burns a lot of energy, even when you’re not putting it to use. So, to keep up their fuel efficiency, sloth bodies don’t have much muscle at all.

The design of their limbs and skeleton allows them to hang pretty effortlessly from their claws. This, in turn, allows them to get by without much muscle, but means that they don’t have any hustle. No hustle at all.

Ok, but why do sloths have slow metabolisms?

Generally speaking, when you “why” a “why” question with a new “why”, you get further toward the ultimate. In this, case, we’re zooming out further. Why are sloths so slow? Because their bodies and metabolisms are slow. But why are their bodies slow?

Sloths are folivorous, meaning that they eat leaves for most of their nutrition. Unfortunately, leaves have way fewer nutrients than fruits, nuts, seeds or insects. So the sloth non-Ferrari car has to also run on really poor-quality fuel. Instead of compensating by eating massive amounts of leaves and having a massive gas tank, sloths use a strategy more like Koalas (Phascolarctos cinereus) in Australia. That is, they use as little energy as possible and let that energy trickle in from a small, but constantly full, fuel tank.

Sloths’ slow rate of digestion limits the amount of energy that they can get from their bellies (fuel tanks). Their four-chambered stomach breaks down their food super slowly. As a result, at any given time, the sloth can’t take in much new food, since its belly takes a long time to empty.

At the same time, sloths get their energy very slowly, and use it very slowly. They have to wait for their bellies to have room before they can eat more. So they eat a handful of leaves here and there, every now and then, and that’s about all they need. This can be less than a half-pound (~0.34kg) a day for many individuals. This keeps the slow engine running.

But why is it advantageous for sloths to be slow?

Zooming out further, we get to a more ultimate question. Why does it pay for sloths to be slow? In other words, why did sloths develop this lifestyle to begin with? Surely it must have had some advantage, or else there wouldn’t be any sloths around today. There are several good reasons.

It keeps them safe

Tropical rainforests are extremely dangerous environments for most wildlife. The density and diversity of predators can be huge. Consequently, tropical plants, animals, and other organisms tend to have amazing and creative ways to keep safe. For sloths, digesting slowly, and having an efficient (slow) internal engine, means they can forage less.

Looking for food less means more time to hide, and less time in harms way. It also means less time being visible. Up in the rainforest, most predators, like Harpy eagles ( ), are visual, and don’t hunt by scent. So being sluggish and not moving much can be a great approach.

All that slow movement in a humid environment also allows specialized algae to grow on sloths’ fur. This enhances their hiding game further, as they start to blend in with the foliage around them. By snoozing and hiding most of the day, and blending in with their environment, sloths keep safe by being hard to notice in the first place.

They can get away with it

Sloths can afford to have a slow metabolism because they live in a hot, tropical climate zone. Having such a slow metabolism means that they can’t actually keep themselves warm internally, the way that mammals and birds can. This would be a problem in higher latitudes and temperate climates, but they can get away with it in the tropics.

If a sloth gets cold, they can climb up to the top of the canopy where the sun is bright, and soak up some rays. Having a slow metabolism lets sloths save energy costs while avoiding the “wasteful” production of body heat that they don’t need.

Thanks for reading about why sloths are slow!

Do you have a sloth story to share? I’d love to hear about it in the comments. As always, if you’ve got a nature question or species that you’d like to see on Gulo in Nature, drop me a message using the contact form!