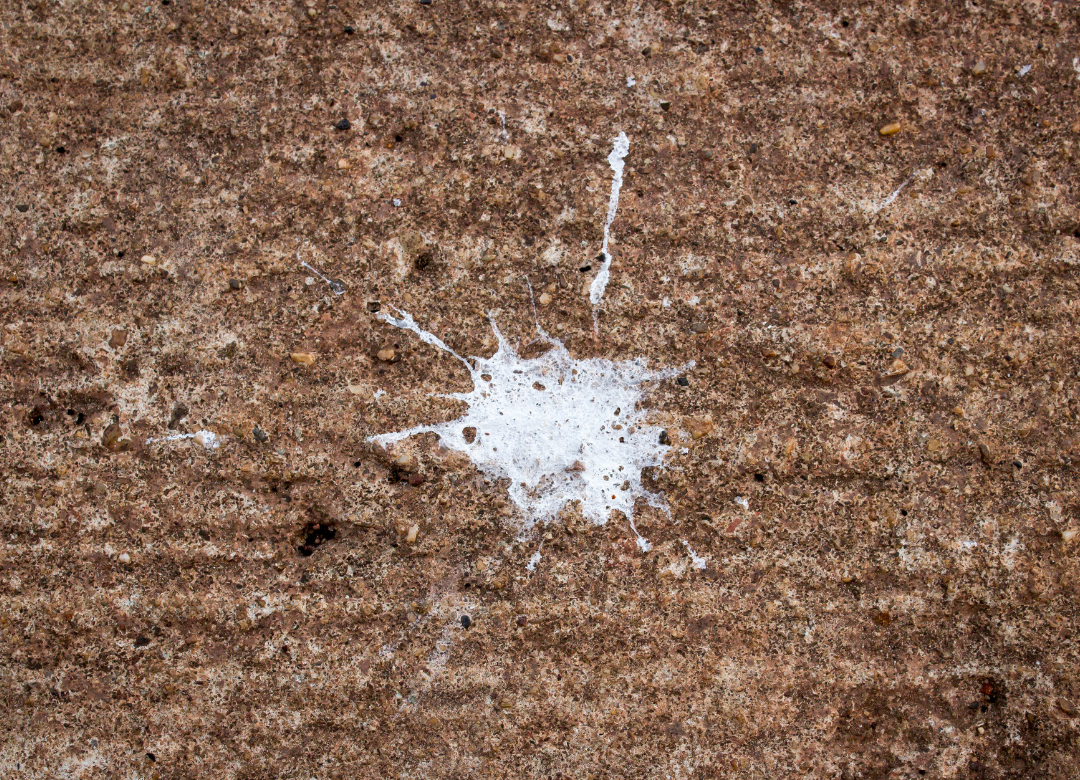 Some people say it’s good luck. Most of us, though, aren’t too thrilled to find a white splat on our car or new sweater. And we know just who to blame: birds. Unlike all the other poo in the animal kingdom, theirs is distinctly white. But why is bird poop white? Let’s find out in this Naturalist Answers post.

I can’t blame you if you’ve never taken a closer look at bird poo. However, if you did, one of the first things you might notice is a couple of basic components. Even without a magnifying glass, you can make out two types of material in bird poop:

The science of bird droppings

For some bird droppings, the second (white) component might make up most or all of the material. In other cases, it might be dyed some funny color like purple, black, or red if the bird is a major berry eater. The less prominent solid part is the birds actual dropping; this, like dog or people poop, consists of solid waste that their body is getting rid of.

The white part, by contrast, is mostly uric acid. Animal cells produce this chemical as a waste product when they digest or metabolize nitrogen-heavy molecules like proteins. In other words, as animals, especially carnivores, eat other organisms and digest the proteins that make them up, they make uric acid.

Uric acid and other waste products can be dangerous if they build up too much in our bodies. Since our living cells have to metabolize to stay alive, we have to get rid of the extra uric acid. But there’s a problem: uric acid doesn’t dissolve well in water. This means that it’s hard to put it into a fluid to get it out of the body.

And yes, this is precisely why bird poop is so hard to get out of clothes and off your car. Just water alone won’t do it!

Most mammals solve this problem by using an enzyme called uricase to break down uric acid to a different chemical called urea. Urea is easy to dissolve in water, and, you guessed it, it is one of the main chemicals in urine (pee). When mammals need to get rid of urea, they use some of their body’s water and just take a wizz.

Birds and reptiles don’t use this method, though. Think about it: have you ever seen an iguana or a robin take a pee? Instead, these animals combine uric acid with their actual solid waste (poop) and excrete both of them through their gastrointestinal tract.

This works especially well for birds because it cuts down on unnecessary weight and equipment. Not needing to pee, birds don’t have to have bladders or any of the associated tubing. Additionally, desert dwelling birds and reptiles can conserve water by not literally peeing it away.

Meanwhile, birds and reptiles only have one orifice (body hole) that waste comes out of: the cloaca. Cloaca means “sewer” in Latin, and that makes good sense! This is the one place where all the waste goes.

The bottom line: Why is bird poop white?

So, let’s recap: Why is bird poop white?

I hope that you found this post helpful, even if it doesn’t clean your car off. If you enjoyed this post or would like to ask a naturalist question of your own, shoot me a message via the Contact page or leave a message below. Until next time!