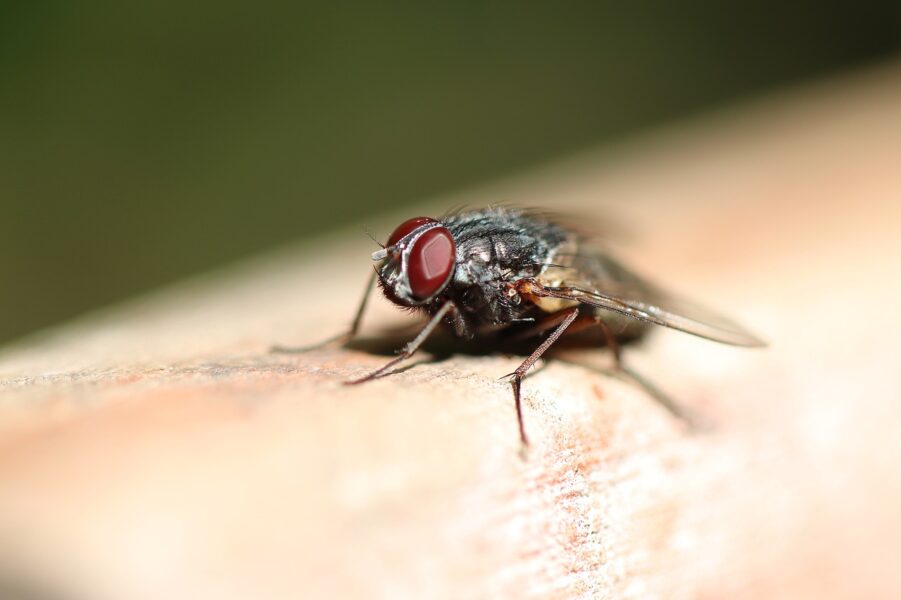 Despite our best efforts, invertebrate visitors are common in our homes. As explained in the first installment of this mini-series, household bugs can be charming, harmless, or potentially dangerous depending on the species. These posts will help you get to know some of the usual suspects and whether or not they’re worth worrying about. As with part 1, I’ll be rating each bug group with the following scale:

So, without further ado, let’s dig in to more household creepy crawlies!

House centipedes (Scutigera coleoptrata) are definitely one of the more intimidating common household bugs. I have heard them called “nightmare fuel” on more than one occasion. They’re rather ugly, can run super fast, , and have more legs than you’d care to count. Thirty, to be exact. Including two long antennae and two tail-like appendages in the rear, they can get pretty big, reaching up to 4 inches in length.

House centipedes also have big, dark, insect-like compound eyes that are less common in other centipedes. They are nocturnal and prefer dark, covered spaces, so you will typically only catch a glimpse of them running between hiding places. A short exposure like that can leave a lot of room to the imagination!

All this creepiness belies the truly beneficial nature of House Centipedes, which might be one of the most helpful bugs covered in this series. Like other centipedes, they are active predators. House centipedes in particular can fit into all of the places that cockroaches can. They have a voracious appetite for harmful household insects. In fact, it is this association with household pests that is likely responsible for their worldwide distribution. House centipedes are native to the Mediterranean but have spread throughout much of the world by hitching a ride with people.

They use their incredible sprinting skills to chase down unwanted household critters, then make easy work of them with venomous appendages called forcipules. Although all centipedes can deliver a painful “bite” with their forcipules, house centipede bites are not dangerous at all. In my experience, House centipedes are more reluctant to bite than other centipedes that you might encounter in a garden. They really aren’t out to get you!

Okay, so let’s just clear the air real quick: Earwigs want nothing to do with your ears. They don’t want to crawl into your ears, or pinch them, or eat them, or anything else your uncle Larry may have told you. If we could ask earwigs what they really wanted, I think they’d have much simpler desires. To have humid, dark places to hide during the day and plenty of plant matter and leftover food to eat in your pantry at night. The “ear” bit apparently comes from the way that the adults’ tiny, non-functional wings fold over their backs, which some people think resembles an ear.

Earwigs are flightless insects in the order Dermaptera. The most common species encountered in homes is the European earwig, (Forficula auricularia) which spread from Europe with colonization like the House centipede. One particularly cool thing about earwigs is that they are fantastic mothers. Earwigs are one of very few non-social insects with extended parental care. Earwig-mamas will clean, tend to, and watch over their eggs, and aggressively defend them from intruders.

Out in nature, earwigs are largely omnivorous scavengers that thrive in moist, sheltered environments. You’ll often find them under rocks and logs. Having undisturbed, dark, wet places in your home could lead to them showing up. Earwigs aren’t dangerous to people or pets (even if your pets eat them) and won’t do much damage to property. At worst, they might eat some food that was left open for a long time.

In stark contrast to House centipedes (or any centipedes, for that matter), millipedes are dopey, slow, and not particularly scary. They have even more legs than centipedes, although their names are a bit of false advertising. They don’t have a thousands of legs, as “milli-” implies, but common species can have a few hundred.

Apparently a species was recently discovered in Australia that does pass the 1,000 leg mark, though, so congratulations to Eumillipes persephone. In the wild, millipedes are plodding, low-energy recyclers of dead plant material. Their many legs work like a truck in low gear (as opposed to the centipede’s lamborghini-style acceleation), allowing them to push powerfully through the soil and debris to find food.

Millipedes are major consumers of extra leaf litter in yards or in the woods. Like earwigs, they hide in dark, moist places where it’s quiet and they can be undisturbed and safe from predators. Like many other insects, they are more likely to enter your home to find shelter than for any other reason. You’re most likely to find millipedes in unfinished basements, or near thresholds, porches, and patios where they enter from outdoors. Since they need decaying plant matter to survive, they can’t find enough to eat in most homes, and won’t be making themselves at home the way roaches might.

Millipedes don’t bite, and their last line of defense is a distasteful chemical secretion from glands near their legs meant to ruin a predator’s appetite. If handled roughly, they can release these chemicals, which are rarely dangerous. Most millipedes in temperate regions are very small, and even if eaten by a dog or cat they won’t do much harm. They typically curl up when threatened and play dead, so pets are likely to lose interest quickly. Since they don’t move particularly fast in the first place, animals often aren’t that interested in them.

You’ve probably already guessed that termites are not great bugs to run into in your home. No surprises here: termites are one of the few bugs you should really be worried about. In my opinion, they are one of the only ones worth calling an exterminator. Unlike Carpenter ants (described in part 1), termites actually can and do eat wood. That is, they literally ingest it, pass it through their guts, and poop it out. By contrast, Carpenter ants do enough damage just by making tunnels into it.

Termites, however, can digest cellulose, a robust organic compound that makes the woody parts of plants tough. Most animals can’t break this down for energy, but termites have a workaround. They support communities of symbiotic microbes inside their bodies which have the ability to break down cellulose and other tough plant compounds.

Also like ants and bees, termites are eusocial. This means that they live in colonies with many sterile workers and a reproductive queen. They aren’t ants, however. Termites belong to their own insect order, isoptera. Generally, they consume dead and rotting plant material, and less animal matter than ants do. You can tell them from ants by their typically lighter color and smaller size. Termites often have less obvious body segments than ants, and no visible eyes.

Because they both eat and live in wood, termites can do extensive damage to wooden houses and other structures. There are thousands of species of termites in the world and fewer than 200 cause major damage. Nonetheless, the ones that do can significantly weaken structures long before you know they’re around, and by then it can be too late.

Living inside of wooden structures, they will often leave few signs of their presence. If you come across termites in your home, it’s worth being cautious and calling a professional. Termites in places like Europe and North America can’t do much harm to you or your pets, but pose a significant risk to your home and property.

The housefly (Musca domestica) is perhaps the best known of a massive order of insects known as diptera. This order includes other pests like mosquitoes and horseflies, but also more pleasant animals like craneflies and hoverflies. You can tell houseflies from other types of flies by their dark color, reddish eyes, slightly hairy bodies, and grayish lines on the thorax. Unlike some of their nastier cousins, houseflies don’t bite, and don’t pose any direct threat to humans or their pets.

Houseflies’ mouthparts are equipped for sucking up liquid foods. They’re usually looking for sugary or fatty substances. This means that they like most of the foods that we do. When those aren’t in liquid form, they can regurgitate saliva and digestive enzymes (yum!) to liquify their meal. Although houseflies don’t eat much and are unlikely to steal your lunch, there’s still reason for concern. Houseflies, like roaches and other common household pests, can transfer foodborne illnesses. They can transfer bacteria and other pathogens on their bodies and introduce those to your food.

Female houseflies can lay hundreds of eggs in food that is left out during the summer. This can quickly turn into a mass of maggots eating whatever they were laid upon. Though they aren’t necessarily dangerous, they’re pretty gross. Not to mention a good sign that you should be covering your trash, or cleaning up more often.

Houseflies have a very short lifespan, often just a couple of days. So if you can keep them from accessing your food and reproducing, they won’t bother you for long. Of course, shooing them out the window or more direct methods with a rolled up newspaper will also suffice. Houseflies aren’t a particularly big deal if you keep your place clean and keep them away from foods. Nonetheless, it’s worth being aware of the risks they can pose and to take their role as disease vectors seriously.

Stay tuned for part 3 of this mini-series! As always, you can give me a shout through the contact page if there are other household bugs you’d like to see featured.