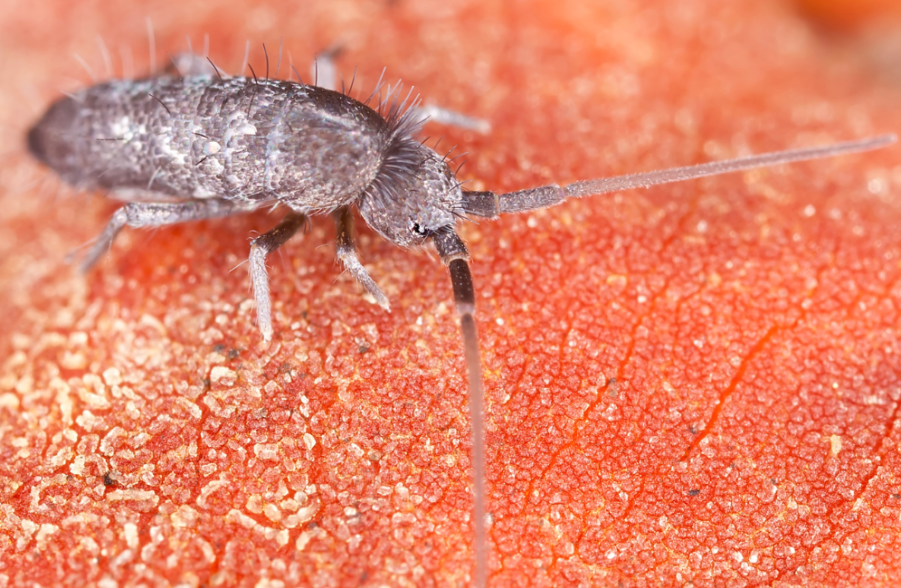 My friend Steve recently sent me a video of some mystery animals from his home in Philadelphia, Pennsylvania. When he walked outside on a spring day after some rain showers, he spotted a weird, blue-gray puddle on the pavement. It didn’t shine like water. He thought maybe it was an oil stain or paint mark. It seemed almost granular, and… was it moving? When he got closer, he noticed that the puddle was actually thousands and thousands of tiny grayish animals! They were crawling all over each other, and every now and then would burst into bouts of leaping. One leaping would set the others off, and they’d pop up inches from the ground in little tornadoes. These things were small, maybe the fraction of the size of an ant. But what the heck were they? And what they were doing? When he sent the video, I was excited to tell him that he had been visited by springtails. But what are springtails?

The story is more than you might expect. Let’s learn about these bizarre, widespread, and fascinating bugs in this Wildlife Spotlight post.

Springtails, also known as collembola, are tiny, highly-adaptable bugs also known as Collembolans. They have six legs, antennae, and small, simple eyes. Different species of Collembola eat all sorts of different things. For instance, while most species consume microbial food sources like bacteria, fungi, and lichens, some feed on plants and other invertebrates.

Many collembola live in leaflitter, and they support decomposers in the environment, by breaking dead plant matter into smaller pieces. Those springtails that hunt prey upon micro-wildlife like rotifers and nematode worms.

A handful of springtail species are harmful agricultural pests that feed on certain plants. However, a much larger number of them actually help agricultural crop production. They help maintain a healthy soil fungus population by controlling the populations of certain species in the food web.

One of the first things that Steve noticed about collembolans is that they are very tiny! In fact, most of them are less than 1/4 of an inch (6.5mm) long. However, the largest springtails in the world, the genus Holacanthella from New Zealand, can reach the gargantuan size of 2/3 of an inch (17mm). You don’t want to mess with those bruisers!

Putting the ‘spring’ in springtail

The jumping behavior of the springtails outside of Steve’s house were one of the biggest signs that what he had found were springtails. After all, springing is part of their name! But why are springtails so jumpy, and how do they do it?

Like many other insects, for example water striders, springtails jump as a way to escape predators. For organisms of their tiny size, what looks like a small jump for us is an incredible leap to safety. In fact, springtails can jump up to 20 times their body length, the equivalent of a person jumping over 200 feet in the air! It must be a very effective escape strategy.

The use of the word “spring” is especially appropriate for springtails because of the mechanism of their jump. Unlike jumping mammals like people or cats that have to flex their muscles and push to make a jump, springtails use a different tactic. Specifically, they have a forked tail called a furculum at the end of their body.

Fascinatingly, the springtails’ jump is so explosive that they can complete a jump in a fraction of a second. One group of springtails, the globular springtails (order Symphypleona), can perform literally hundreds of tiny backflips in the span of a single second!

Not all collembolans can jump; many underground species don’t need to, so they don’t even have a furculum.

You may have noticed that I used the word “bugs”, but not “insects” to describe these critters. This was intentional. While springtails were considered an ancient lineage of insects for a long time, they have recently been reclassified as their own subclass (Collembola) of the class Entognatha. Unlike insects, collembolans have no wings, and simple rather than compound eyes.

Furthermore, they lack the three clear body segments (head, abdomen and thorax) that insects have. Finally, while insects have their mouthparts on the outside of their heads, collembolans’ mouthparts are internal. Hence their class’ name, which comes from ento meaning inside, and gnathos, meaning jaw.

In addition to the furculum, collembolans also have a weird body part that insects don’t have. The collophore is a little hollow tube that sticks out of their bellies. People originally thought that the collophore served to help springtails stick to surfaces.

In fact, this is where their scientific name comes from. The name collembola is based on the word colla (glue) and embolos (peg), for how the collophore supposedly anchors the springtail. Generally, scientists nowadays believe that the collophore serves in regulating moisture in the springtails body.

Where can you find springtails?

The short answer to this is “almost everywhere”. Since they are tiny and eat so many different things they can persist in a huge variety of habitats. Along those lines, springtails may be one of the most abundant of all non-microscopic animals. In some cases, you can expect to find tens to hundreds of thousands of individuals in a square yard (~1m) of area!

Springtails typically prefer moist environments with high humidity. A great number of springtail species live on plants and on the surface of leaf litter, as well as under logs and in the upper layers of the soil. The springtail species adapted to these different habitats are shaped and colored differently according to their environment.

You can find springtails in mosses, plants, grasses, dirt, and fallen wood in every part of the world, including Antarctica. They can even be found in snow (see below!) and in tidepools. The water springtail (Podura aquatica) lives on all kinds of calm waters, from puddles to ponds and slow streams.

Springtails in the house

Since you can find springtails pretty much everywhere, it makes sense that they may turn up in our homes. Indeed, collembolans are another example of a common household bug. Being super tiny, they can easily enter homes through small cracks and imperfections in the roof or siding, or doors and windows. They can also be carried inside via potted plants and their soil. Since they mostly require humid environments, look out for sources of moisture in your home like aging or ineffective weatherproofing around windows.

Fortunately, springtails are absolutely harmless to you, your pets, and your home. Additionally, they don’t live particularly long, and with nothing to eat they will die off rather quickly.

If springtails are so common and widespread, why don’t we see them everywhere? Most of them are so small and so dully colored that you won’t see them unless they’re in big groups. This is especially true for ground-dwelling collembolans; how often do we look closely at dirt and leaf litter? If you actually did, you’d be almost guaranteed to find some of these little critters eventually.

In Steve’s case, it was an aggregation or gathering of springtails that caught his attention. Collembolans will gather where there is abundant food and moisture. Because they also reproduce quickly, their numbers can get very large in a short time. Unless you go out looking for them, this is the most common way that people encounter springtails.

One species is an especially strong exception to the rule of springtails being subtle and hard to see. That is the snowflea (Hypogastrura nivicola). Snowfleas are pretty average as far as collembolans go. They’re small and darkly colored and can spring with the best of them. However, while they hide in leaf litter throughout the spring and summer, they stay active in winter.

They’ll even gather on top of snow where they feed on fungal spores and other foods. This makes them a star example of a winter insect, and their black color stands out sharply against the white of the snow. If you ever encounter what looks like a pile of pepper shook out on the surface of the snow, have a closer look. You may be treated to an up-close-and-personal encounter with your first springtails!

Check out the video below, which I recorded in Fall 2019 while on a hike in Montana.

Thanks for reading about springtails!

Have you run into any springtails in unexpected places? Share your story in the comments! If you’ve got a bug that you’d like to learn about in a Wildlife Spotlight, get in touch through the Contact page. Thanks, and until next time!