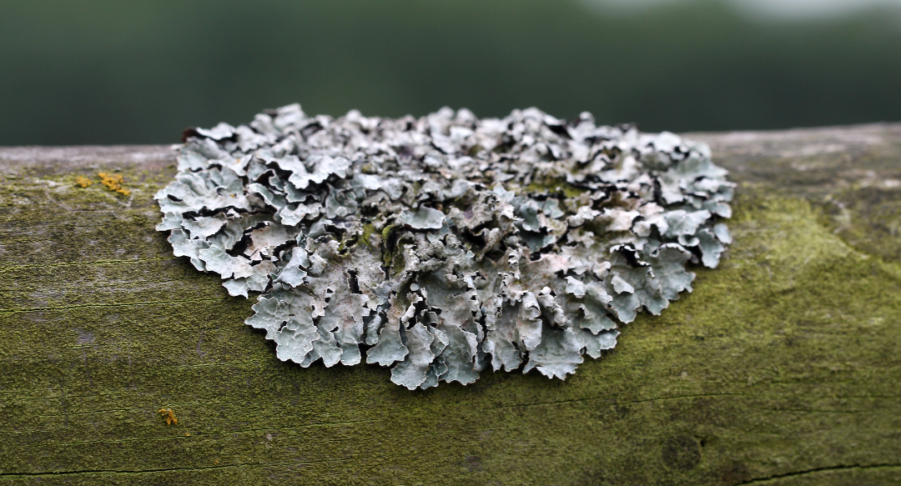 Sometimes of the coolest things in nature are small and hard to notice. Using a magnifying glass, we get a window into entire micro-worlds in our back yards or on a bouldering cliff. In this Wildlife Spotlight post, I want to introduce you to an amazing organism that you have seen before if you’ve ever been outside. But, chances are you haven’t noticed or recognized them. These things can live for thousands of years, survive the radiation in space, and eat rocks for breakfast. I’m talking about lichens. But what the heck is a lichen? Let’s get the lowdown on these micro-wonders.

The basics of what a lichen is

You’ve almost definitely seen a lichen before, but you might not have known it. As we’ll see later in this post, lichens come in a diversity of shapes, sizes, and colors. Generally speaking, though, they are plant- or moss-like, sessile organisms. In other words, they don’t move. Like fungi and plants, they have cell walls, so they are definitely not animals.

They are often greenish, a color that we associate with photosynthesis. In other words, lichens look like they’re equipped to make their own food using energy from the sun. Spoiler alert: they can. Lichens are usually small, flat or short in stature like mosses. You’ll typically find them growing on hard substrates that plants can’t handle, like boulders or gravestones. Unlike mosses, they are usually a little stiffer and drier to the touch, and can be crusty in texture.

So what is a lichen? A (usually) greenish, small, crusty thing that hangs out in places where other organisms often can’t. Great. However, that’s not the most satisfying answer, is it? Let’s get you some information that will help you impress friends on your next hike.

To really answer the question “what is a lichen?” we may have stretch out minds a little. Technically, lichens are actually not a single organism. In fact, they consist of at least two organisms at once, living closely intertwined. Specifically, lichens consist of a fungus that forms the main “body” of the lichen, and one or more photosynthetic organisms that dwell inside.

These are typically green algae or cyanobacteria, both of which can use their green pigments to make food from the sun’s radiation. Cyanobacteria, formerly called blue-green algae, are an ancient form of one-celled life. Green algae are thought to be the ancestors of modern plants.

Biologists call such close interactions between organisms symbioses. If this brings Marvel’s Venom to mind, you’re spot-on. You can think of the down-on-his-luck reporter Eddie Brock as the fungus, and the alien symbiote as the photosynthetic alga or bacterium. On one hand, the fungus provides the structure of the lichen and maintains conditions to keep the symbiont healthy.

On the flipside, the alga or cyanobacterium photosynthesizes to make food, and the fungus feeds on this food. The fungi also tend to “digest” the hard surfaces on which they’re sitting to get minerals. Some of these in turn are provided to the photosynthetic symbiote to help it along.

Not necessarily all sunshine and rainbows

While this sounds like a pretty idyllic setup for both partners, it’s not clear how mutual the dependence is. Scientists have found species of algae and fungi that are often part of lichen living freely on their own. So, they’re not necessarily dependent on it. In fact, an increasing number of lichen researchers think that the fungus is largely in control. As they put it, the algae or cyanobacteria are being “held hostage” for their photosynthetic sugar production.

Lichens are small, which means that, like mosses, they don’t need fancy vascular tissue to move water around their bodies. They can just absorb water from their environment. By contrast, larger and more complex plants like trees, grasses, and wildflowers need to carry water up their steps. Otherwise, it would never get to the cells higher up that needed it.

Additionally, lichens lack the waxy cuticle that plants use to wall themselves off from their environment. This allows plants to determine what comes inside of their bodies. As a result, they can avoid taking in certain airborne or water-borne toxins. Lichens don’t have this ability; whatever is floating around in the air will get inside of them. Because of this, they are very sensitive to air and water pollution. If you see large amounts or varieties of lichen in a natural area, it’s a very good sign!

A lichen’s body is like an algae (or cyanobacterium) sandwich. On the outside, you have the cortex, the tougher, tightly-packed fungal cells that protect their photosynthetic partner. Inside of that is the algal layer, where the symbionts live and produce sugars through photosynthesis.

Finally, there is the medulla, which makes up the majority of the fungal cells in the lichen. This consists of tightly-packed filaments of fungal tissue known as hyphae. These are responsible for the exchange of water, nutrients, and food between the symbionts and the rest of the lichen.

Naturalists divide lichens into three main categories based on how they grow and look. These three types are:

Lichens also come in a lot of colors. Although some color is due to the fungal host, different colors on a lichen are often due to different symbionts inside.

Where can you find lichens?

You’ll find the greatest abundance and diversity of lichens in moist, humid climates. Those sorts of climates allow them to get water to their symbiotes to keep them productive. Areas with frequent fog, like on oceanic or lake coasts or mountainsides, often support a lot of lichens. Since lichens don’t need to have roots in the dirt like a plant, they can live in all kinds of environments.

For instance, you’ll often find them living as epiphytes on tree branches or bark. Lichens have similar limitations as mosses, in that they don’t have vascular tissue. Because of this you may often find lichens and mosses in the same place. In fact, lichen researchers have shown that lichens often survive better near mosses, since these mosses can retain water and keep the area around them wetter.

Lichens also excel in environments that plants can’t handle. As a result, you’ll find loads of them living on mountaintops, boulders, and cliffs. Fascinatingly, there are even marine lichens all around the shoreline. If you’ve ever wondered why big rocks on the seashore have a blackish staining to them, chances are it’s actually because of a lichen!

Here are some field guides and textbooks that will be worthwhile if you want to dig deeper into lichens and their biology, or find them in the field.

Some awesome books with sections on lichens

Look out for lichens!

Lichens are another great way to learn about and connect with nature. Can you find lichens of all three types in your neighborhood? What colors have you found? Share your sightings in the comments!