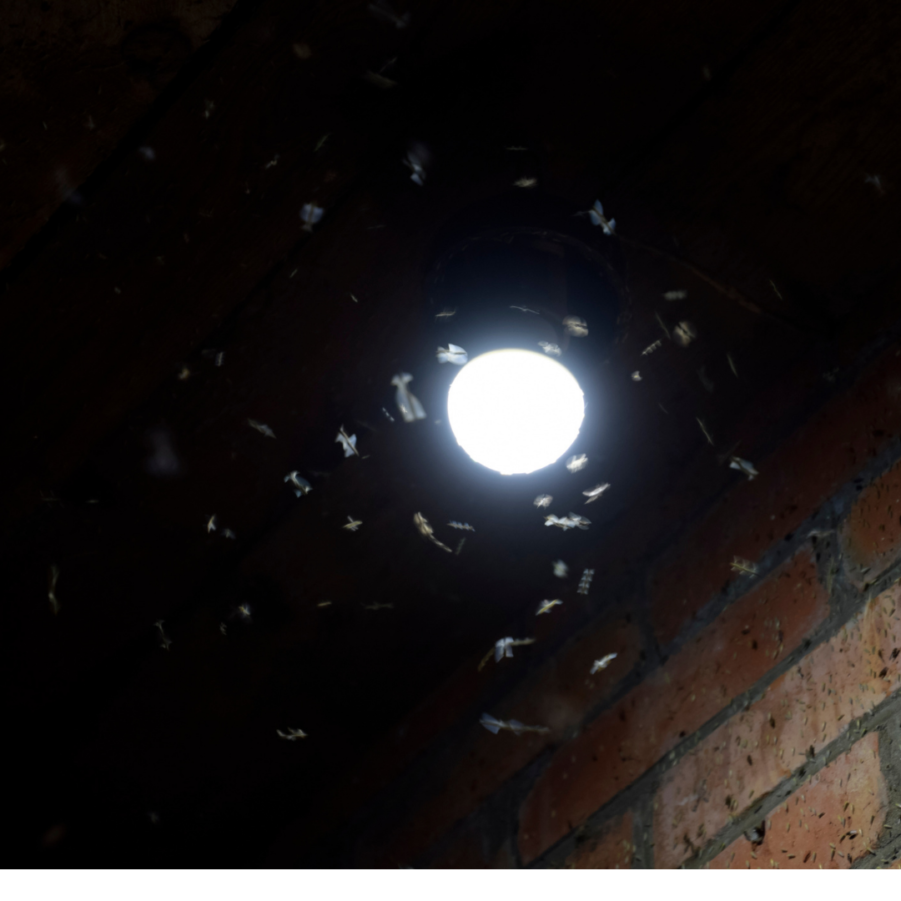 Many interesting bugs are night-flying or nocturnal, becoming active after dusk. If you’ve ever left a porch light on or had a campfire in the summer, you also know that nighttime bugs are attracted to light. Expressions like “like a moth to the flame” show that people have seen this happen for a long time. But why do bugs like light? What about it is attractive to them?

This Naturalist Answers post will take you through what scientists have learned about bugs and their fascination with light.

While popular memes make good use of adorable moths passionately seeking their dream-lamp, a lot of insects approach light sources at night. This includes insect species from different orders and families that are totally unrelated to one another. They eat different things and sometimes occupy different habitats. Nonetheless, all of them gather around artificial light sources at night time. Some common light-chasing bugs you might encounter include:

If you’re relatively close to a body of water, you might also find several aquatic insect species buzzing around your lights:

Scientists might ask the question, “why do bugs like light?” as “why do some insects show positive phototaxis?”. Many household bugs are negatively phototactic, while the ones I listed above are positively phototactic, at least at night.

A lot of ideas

Just like the question of why birds sing in the morning, there is not yet a scientific consensus on why some insects seek out sources of light at night. However, just as with morning birdsong, there are many ideas for why bugs might behave this way.

While many of these explanations have some evidence to back them up, they may differ between species. In some cases, a combination of these causes may be acting at once. Bugs may like lights because they:

One of the best supported and oldest explanations for insect phototaxis at night is that artificial lights mess up their navigation systems. Because the angle of the moon and the stars in the night sky don’t change when a bug moves around at night, they are important reference points.

In other words, many nocturnal bugs use these “lights in the sky” like sailors use the North star or Southern cross. It helps them know what direction they’re headed and keep their bearings. You can think of steady lights in the night sky like a compass reading for night-time bugs.

When we introduce artificial lights like streetlights, billboards, car headlights, and so-on, bugs suddenly encounter new, close-by sources of light. This makes the North-arrow of their compass move around, rather than stay steady. When a bug moves around outside, the orientation of those lights will change more in their perspective than the stars.

This confuses the bug, which is often trying to keep the light at a given angle from its eyes in order to move in a straight line. Being confused this way, a bug may fly in a spiral toward the light and eventually collide with it. Scientists argue that this is why bugs approach sources of light in a spiral, rather than a straight line.

Behavioral scientists in the 1950’s proposed that bugs approaching light might just be getting bewildered. They suggested that insects do a spiral flight when they’re stunned or disoriented. This is sort of like a boxer stumbling or flailing around after taking a big punch on the chin. These scientists suggested that bugs’ senses are overwhelmed by bright lights at night.

As a result, they “stagger” around in a spiral flight and end up smacking into lights or perching by them, down for the count. This explanation, although simple, helps explain why so many bugs will find lights at night and then stick around and not go anywhere.

…in all the wrong places

In the 1970’s, researchers found that bug antennae perceive some chemicals as waves of energy, making them similar to some types of light. Because of their different ways of “seeing” chemicals and light, bugs can confuse the two.

Based on this theory, male moths can get confused between the infra-red light emitted by candles, which they mistake for chemicals emitted by potential mates. Bizarrely, this triggers the male moth to try and mate with fire, and… you can imagine how that goes for him.

Scientists also think that some insects perceive light in their environment as a sign of open space and a clear flying path. This means that they angle their flight towards lighter areas when they’re trying to get a move-on.

Secondly, bugs may do this when trying to evade a predator or other unwanted situation. Again, when they encounter artificial light, bugs end up flying toward it, thinking that’s their clearest path forward. Of course, then they end up smacking into a lightbulb! As with the other explanations for why bugs like light, this is a situation of insects coming across sources of light that they never dealt with before people came along.

How can we help?

As you might have guessed, bugs aren’t doing themselves any favors when they seek out porchlights and streetlamps. In fact, this attraction may be a fatal one. Insects that show up at lights at night-time are more likely to die or waste a lot of their short lives hanging around rather than finding food or mates. Using outdoor light sources that are less attractive to insects is a win-win. They avoid injury and wasting their precious energy, and we don’t have annoying moths barging in on peaceful porch conversations.

Doing research on this topic, I was really surprised to find a whole variety of “bug lights” available online. These bulbs filter out the short-wave “cold” spectrum of colors, giving them a cozy warm hue that is less attractive to insects. I’ve included links to a few different sizes below if you’d like to lend a helping hand to nocturnal insects in your area!

Have you had any night-time encounters with great bugs around artificial lighting? Share your experience in the comments! If you have another burning question for Naturalist Answers, be sure to reach out via the Contact page.