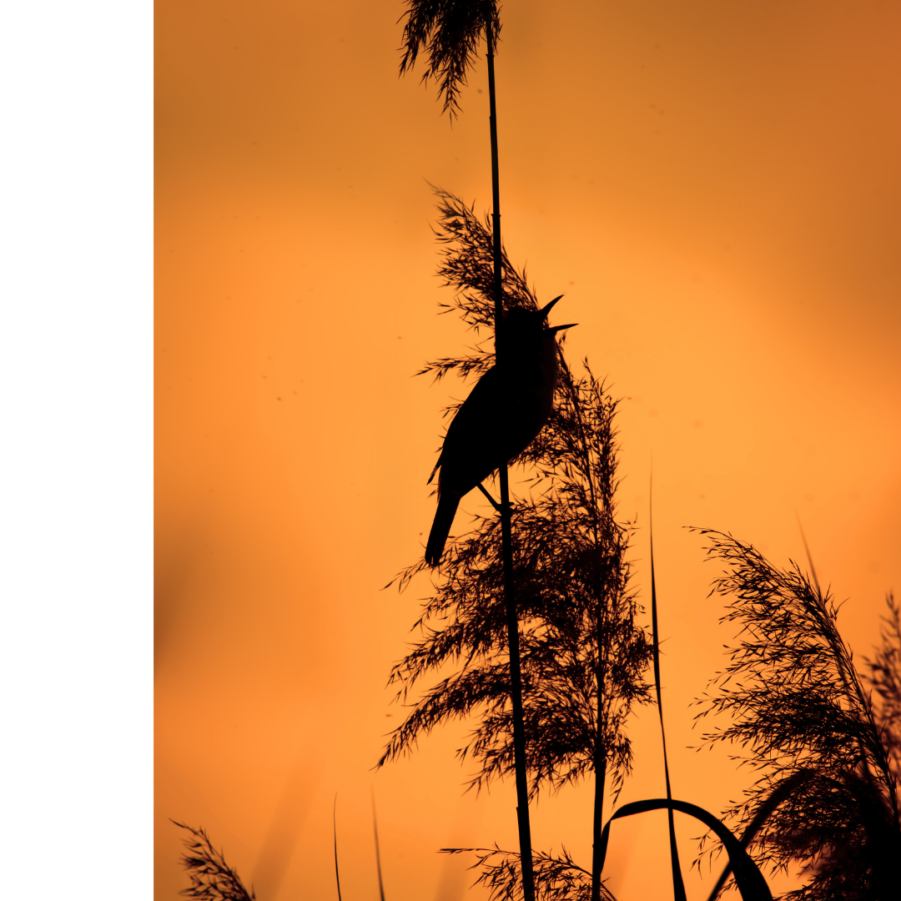 Trying to sleep in on a weekend morning in early June, I was awakened by my neighbors. It wasn’t a loud phone call, a.m. dance party or super-loud footsteps upstairs. A Brown thrasher, American robin, and Northern mockingbird had started singing their little hearts out. Looking out the window, I noticed that the sun was just starting to come up. Birds always seem to sing loudest in the morning.

Out in the weird pre-dawn darkness, I could hear dozens of birds singing more vigorously, loudly and copiously than at any other time of day. “The Dawn Chorus,” I thought to myself; the name birdwatchers use for the way that birds sing, often very loudly, early in the morning.

Although it doesn’t usually wake people up, the dawn chorus happens on most spring and summer mornings. It’s well-known among birders, campers, and backpackers, who are most likely to be awake and outdoors at the right time to hear it. But why is there a dawn chorus? In other words, why do birds sing their loudest first thing in the morning? In this Naturalist Answers post, we’ll explore the science of why birds sing early in the morning.

Why do birds sing at all?

A good place to start is with a basic understanding of why birds sing in the first place. After that, we can better interpret their motivations for being so darn noisy before sunrise. As you may have read in my post on why sloths are so slow, “why” questions in ecology can be tricky.

Many animals keep territories in order to protect their access to certain resources. These might include food, nesting space, or available mates. To maintain a territory, an animal needs to advertise its presence in that location consistently. Singing is how many Passerine birds accomplish this. In other words, it acts like a warning. “This spot is taken. Keep moving.”

This is similar to how mammals like dogs will mark their territory using scents. Birds, however, are more tuned in to sounds than scents, so singing makes more sense (no pun intended). Since adult birds are typically the only ones to keep territories, they do all the singing. In many species, males are responsible for keeping territories. Because of this, they are very often the primary singers.

Another thing that territorial signals advertise is availability for breeding. Beyond letting rivals know that a territory is taken, a bird may also be letting potential mates know there’s a hot date in the neighborhood. Again, in most species the primary singers are males. This means that the reproductive side of song functions to let females know that there is an eligible male around.

This helps birds find mates and, in species that do so, allows them to pair off and form the necessary bonds to raise young. As we will touch upon later, male song in many species can also induce fertility in females. In other words, when females hear the song of a male of their species, they may become more receptive to mating and capable of producing viable eggs.

Although we tend to think of it as peaceful and soothing, singing in birds is actually somewhat aggressive. Singing in male birds is initiated by increases in testosterone in the body. In other words, birdsong in one sense is a bit of a macho move. It’s certainly closer to blasting loud music from a sports car than performing some lovely tra-la-la’s.

When males are becoming reproductively active, they use singing to advertise how tough, strong, and healthy they are. In other words, a bird’s song becomes a signal of what biologists call their fitness. An animal’s fitness is how well its various traits make it suited to survive and pass on offspring to the next generation.

By signaling their fitness with birdsong, male birds can resolve conflicts before a fight breaks out (most of the time). With singing as an aggressive display, they can let other males know that they are big and tough without physical force. You may see male robins (in North America) or blackbirds (in Europe) get in tussles in the spring, but this is usually only after a lot of singing.

So, why do birds sing in the morning?

Having read through the latest scientific literature on this topic, I’m sorry to say that the jury is still out on this one. Anyone who tells you that they know a single reason for the dawn chorus is lying to themselves and you!

However, don’t let the uncertainty fool you. Scientists have been studying this question for over a hundred years, and the problem isn’t that there are no good explanations. Instead, it’s that there are too many. A lot of them have had at least some scientific evidence to back them up in recent decades.

Overall, this means that the shortest answer to “why do birds sing in the morning?” is “it depends.” It depends on the species, the habitat, and the situation. Beyond that, for any given situation, the explanation may be several of these! Let’s work our way through a few of these hypotheses explaining the dawn chorus.

If you’re really interested in digging into the science here, a 2020 book chapter by two Spanish Ecologists is the best academic summary I’ve found on the topic. Their great work is the basis for much of the rest of this post.

Here are some of the reasons that scientists think birds might sing in the morning:

Let’s dive into some of these weird explanations!

The idea that birds sing in the morning to avoid competing with other sounds has some good support. For instance, birds in the the tropics have to compete with louder and more abundant singing bugs. By singing in the morning when bugs are less active, they improve their chances of being heard. Scientists found similar patterns in urban areas, where people make lots of noise during the day. Many birds shifted their singing times earlier to avoid getting drowned out by sounds like rush-hour traffic.

Hormones and the dawn chorus

All animals have predictable changes in their bodies throughout the day and night. This is called their circadian rhythm. Key hormones like melatonin, which is part of sleep regulation, and testosterone, can fluctuate a lot. Studies have shown that melatonin and testosterone both influence bird song. In particular, melatonin has it’s ups and downs based on the timing of sunrise and sunset. Because of that, it is the most likely candidate for dawn chorus coming from changes inside of the birds themselves.

Is the dawn chorus for cheating?

A male bird’s song can stimulate a female bird of the same species to enter a fertile phase of her hormone cycle. That is, her own body responds to the sound, and she is able to mate and produce eggs that can hatch into chicks. Interestingly, many male birds keep singing after their mate has already produced offspring. At this stage, they are nesting, and she is no longer fertile.

Although maintaining a territory is important, biologists think he may be singing for another reason. In particular, he may be trying to stimulate another nearby female to be fertile. Since he is less likely to be detected sneaking off in the morning, that’s the best time to advertise himself to potential side-mates.

Well, there’s nothing better to do…

Another interesting idea is that it’s too dark early in the morning for birds to do anything else. Since they can’t find food efficiently, they might as well make a little music. After all, it pays to maintain a territory, so it’s worth the extra effort. Researchers believe that birds can get enough sleep even when they wake up before dawn, so getting some singing in before they go off to eat might be a great adaptation.

Night is a dangerous time for a lot of animals. Predators may prowl in the darkness, and it’s hard to find food. In harsher climates, it can get dangerously cold. As a result, not all of the birds who went to sleep the night before will still be around in the morning. For highly territorial species like songbirds, maintaining your territory means making sure your neighbors know that you’re still there. Singing loudly every morning lets everybody know that you made it through the night. Where night time is especially dangerous, this is a necessary daily activity.

In some habitats, the air conditions just before sunrise allow sound to carry better. Before dawn, the air tends to be cooler and less turbulent. In some habitat types, this could help birds get more bang for their buck when they sing. You can think of this like the difference between singing in the shower and singing in a concert hall. Even with the same performance, one of those will sound way better than the other!

Toughest dude on the block

Morning is also a tough time because birds have gone the whole night without eating. Since it’s hard to forage in the dark before dawn, this is the hungriest part of their day. That could make it especially hard to sing a loud, vigorous song. On the other hand, any male that can belt it out first thing in the morning must be one tough dude. By singing their loudest and best first thing in the morning, male birds may be strategically giving the best possible signal of their fitness.

What birds do you hear singing when you wake up first thing in the morning? If you don’t know, try using an outdoor mobile app like Merlin to identify some songs! As always, you can let me know what you think of this post in the comments or via the contact page. Until next time!