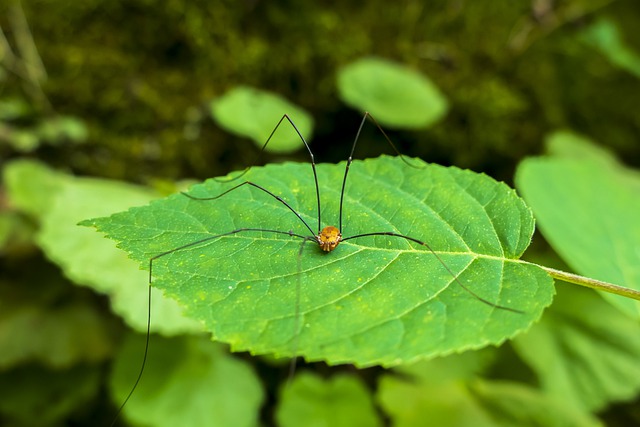 It’s a surprisingly common “nature fact” that I hear from people of all ages. A spindly spider-like invertebrate is trundling along a log and someone says, “Did you know that daddy long-legs have the deadliest venom in the world, but their mouthparts can’t get through human skin?”
Everywhere that I’ve heard it, it’s always about the same. These weird bugs would be super dangerous if their chompers could get a good hold on us.

But is that true? Absolutely not! However, that doesn’t mean that Daddy long-legs aren’t super awesome. In this post, I’ll give you some real facts that you can mention next time you see one and stop these weird rumors from spreading.

First off, we’ve got to address a major issue that could make this really confusing. The nickname “Daddy long-legs” applies to a couple of very different animals. As we’ll see, only one of them is venomous, and none of them have ever been found to do any harm to people. Depending on the region you’re in, when you hear Daddy (or grandaddy) long-legs, folks may be referring to:

It’s not hard to see why all three of these super-leggy bugs got the same nickname. But it’s worth knowing just how different they are from one another. This is a widespread issue with what we call “common names” in natural history. When we give something a colloquial name, sometimes other folks have given the same one to a totally different species! This is the reason naturalists like using scientific binomial nomenclature, but more on that in another post.

The only real spider

Pholcid spiders are common in houses, garages, basements, and sheds. I often find them in the corners of ceilings where they wait for flies and other household insects to run into their web. Pholcids have tiny bodies and very long, spindly legs compared to many other spiders, which explains why they’re in the Daddy long-legs club.

Like all other spiders, they have two body segments, an abdomen and a cephalothorax which has the legs. Like many (but definitely not all!) spiders, these house spiders hang out in webs with which they capture prey.

They also have glands for producing venom, and fangs for delivering it to their prey. This is also characteristic of spiders. Importantly, the venom of Pholcid spiders doesn’t seem to do any real harm to people. I was bitten by one in my parents’ basement as a kid, and although it was a little painful, all I ever experienced was a black spot on my finger. It went away after a week or so.

The one that flies

Unlike the other two long-legged bugs, both of which are arachnids, craneflies of the family Tipulidae are insects. Like many other insects, they can have wings and can fly, and have six legs and three body segments. This should make them relatively easy to tell apart from spiders and harvestmen.

Craneflies are flies, whose larvae typically live under the soil and feed on decaying wood and other detritus. They have brief lives as adults, often being out and about just long enough to breed and lay eggs. Some species don’t have any mouthparts whatsoever, while others will feed on flower nectar. Craneflies are often mistaken for giant mosquitoes, but they don’t bite at all and are completely harmless. It does sort of tickle when they land on you, though.

Harvestmen and why they’re awesome

That brings us to the last of the three Daddy long-legs musketeers: harvestmen. These weird, spidery bugs are probably very familiar to many readers. Most people assume that they are spiders, which is easy to understand. They’ve got eight legs and walk in a pretty spider-y way. Although harvestmen are arachnids, and therefore in the same class as spiders, they belong to a different order: opiliones.

Their name comes from the Latin word Opilio, meaning shepherd. The name arose because apparently ancient shepherds used to wear stilts to keep a better eye on their flocks, which were likened to the harvestmen’s long legs. There are over 6,000 described species in this group found on all continents except Antarctica, and readers in Asia, Australia, Europe, and the Americas should have no problem finding them.

Not quite a spider?

Harvestmen differ from spiders because their two body segments (the abdomen and cephalothorax) are fused and look like a single, pill-like body. They hold up their body with eight very long, spindly, almost thread-like legs. Some tropical species are a bit more crablike in appearance, but these aren’t very common.

Harvestmen also have only two functioning eyes perched at the top of their head, as opposed to the eight eyes typical of spiders. Their tiny eyes are also not very functional since they prefer dark places and night-time routines, so harvestmen typically feel their way around with their second pair of legs.

Harvestmen are unable to produce silk, and as I mentioned before, don’t have venom glands or fangs like spiders. This makes them very safe and easy to handle. In my experience, they are typically very mellow and unafraid if you pick them up gently or let them walk on you. One of their major methods of defense is to secrete a weird-smelling chemical from their body and leg joints.

I’ve never gotten one upset enough to have it do this, but I am told it’s not very offensive to people. Alternatively, harvestmen will autotomize—that is, cut their own limbs off! If a predator gets a hold of one of their limbs, they will detach it, and special nerve cells inside the leg will make it keep moving so it distracts the predator while the opilionid makes its escape.

Harvestmen live a very different lifestyle than their distant cousins, the spiders. They are free roaming, a more like certain groups of spiders, but are not big-time predators. They will take any opportunity to feed on smaller invertebrates when they get a hold of them, but aren’t good at hunting and killing prey. Instead, they’ll take what they can get. I often find them feeding on detritus, including fungus, rotting plant materials, or dead animals including insects or small carrion. I have heard their mouthparts described as “little grabby things”, and so without any fearsome equipment they are mostly limited to what they can find.

This omnivorous diet, and opilionid‘s love of dark, humid places, also makes them much more social than many spiders as adults. Harvestmen will often gather in groups (this is called gregariousness) which in my experience can sometimes number dozens of individuals.

In some species of harvestmen, males provide parental care by guarding eggs after a female has laid them. While spider moms are typically more nurturing, harvestman dads break the mold. Often, they are specifically protecting eggs from other females, who may try to eat the eggs!

Thanks for reading this daddy long-legs myth-busting!

I hope that you learned a thing or do about Daddy long-legs, and why they’re interesting in their own right. As always, if you’ve got any nature myths you’d love busted, questions you’d like answers, or wildlife you’d like to learn more about, don’t hesitate to reach out through the contact page!