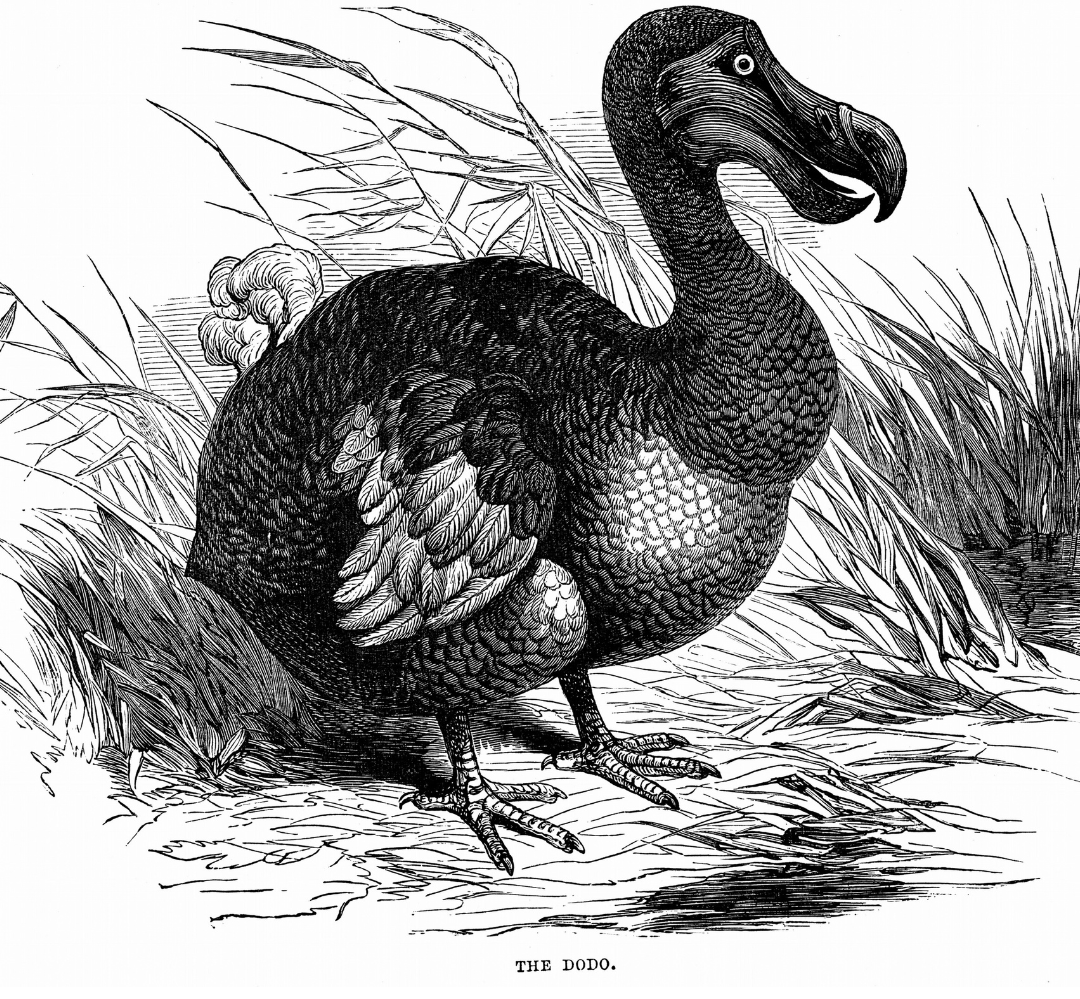 Endangered species—those at risk of going extinct—often tend to get a lot of press and attention. Aside from climate change, they are among the best known environmental issues. Groups like the IUCN spend huge amounts of time and money trying to protect species that might go extinct. Likewise, people like me spend their entire careers studying how to prevent extinctions. But why is it bad when species go extinct? Is it always a problem, or can it even be a good thing?

Scientists use the term extinction to refer to the complete loss of a species of wildlife. In other words, extinction is when a form of life has totally disappeared. Extinction means gone forever. If there are no more individuals around to reproduce, a species can never come back. Although efforts to de-extinct species, a la Jurassic Park, are ongoing, none have been successful. Furthermore, they are hugely expensive and impractical. In short, don’t hold your breath to see Dodos walking around ever again.

When a species goes extinct, it will never be seen again.

Many skeptics of the conservation movement argue that it is natural for species to disappear over time. If you look at the fossil record, thousands upon thousands of species have gone extinct on Earth since life arose. During certain mass extinction events, huge amounts of our planet’s biodiversity disappeared in a relatively short time.

Despite this, life on Earth continues today. So what’s the big deal? If tons of extinctions have happened before, why is it so bad if they are happening again now? Isn’t it just natural for species to go extinct?

Yes and no. While factors like changing climates and biological invasions due to colliding continents and new land bridges drove past extinctions, 21st century extinctions are different. Why? First of all, because their causes are not “natural”. Specifically, all modern species extinctions can be linked to one very un-natural cause: us!

Human beings, from indigenous societies on every continent to modern industrialized economies, are the reason for just about every extinction in recorded history. And many more before that!

So, while species extinctions are natural, the ones we’re seeing today are not. They are also happening much, much faster than “normal” background extinction rates. Some scientists estimate up to 100 times faster! We are causing these extinctions, and we can do something to stop them. But why should we? Does it really matter if a species goes extinct?

Why is it bad when a species goes extinct?

Species are a major part of biodiversity, the variety of life forms on Earth. This diversity plays a major role in keeping ecosystems and natural places working. In turn, ecosystems make life on Earth, well, livable, by providing ecosystem services. These include things like:

For specific examples of some of these services, check out my post on Why we need forests.

When we lose individual species, nature’s ability to provide these many services shrinks. Scientists have famously compared this to popping out rivets from an airplane. While each individual rivet or loose screw might not cause much apparent harm, eventually a wing or an engine falls off. Then, the airplane can no longer do its job, and the consequences are disastrous!

Each time a species go extinct, the irreplaceable services we get from nature are put in further jeopardy. In other words, we get closer to closer to having our plane go down.

Species extinctions can harm our health

By supporting healthy, vibrant ecosystems and natural spaces, species also do a lot for human health. When species go extinct, we risk losing these benefits as natural places degrade. Although it’s very easy to overlook, healthy and biodiverse ecosystems work wonders on many aspects of our health. For example, spending time in nature:

With healthcare costs on the rise and hospital systems still reeling from a pandemic, these health benefits are super important. By allowing species to extinct, we are wasting these valuable ways to live happier, healthier lives.

It can mean more pandemics

Even before the COVID pandemic, scientists were warning us that species extinctions and damage to ecosystems would make pandemics more likely. Since then, the message has become even more clear. The destruction of natural ecosystems increases disease loads in wildlife, leading to sicker animals. These animals come into contact with other species that they never used to. In turn, this leads to more diseases getting moved around between species.

These zoonoses (ZOO-oh-no-sees) diseases moving between species) inevitably come to us. Often times, we humans have not been exposed to these types of diseases before (like with COVID). As a result, the potential for loss of life and pandemic-scale problems becomes very high.

By preventing species extinctions and protecting natural ecosystems, we keep wildlife healthy in ways that keep us healthy. That not only saves thousands if not millions of lives, but it also prevents future economic disasters.

When species go extinct, it hurts the economy

Losing species also has major implications for the economy. While 2020 showed us that pandemics can have disastrous consequences for global wealth, that is only the beginning when it comes to biodiversity loss. When a species goes extinct, it also means:

These and many other factors mean that biodiversity makes a big difference for the bottom line. By letting species extinctions continue unabated, we risk major impacts on important business sectors from agriculture, transportation and manufacture. However, our wallets aren’t the only thing telling us that it’s bad to let species go extinct.

While there are lots of reasons to protect species and conserve biodiversity for our own sake, people often overlook another very important reason. It’s just the right thing to do. When a species goes extinct, it’s gone forever. No one can ever see one, hear one, watch one again. This means that every future generation is robbed of that unique form of life. It’s a sad, permanent, nasty thing. Like destroying an original painting by a famous artist, or letting someone die of a preventable disease.

Thinking about how much joy and fulfillment people get from activities like birdwatching and visiting national parks, it’s clear that species extinctions infringe on people’s right to enjoy time outside. Because of this, many people believe that our generation has a moral obligation to protect nature for future generations.

Many indigenous and non-Western cultures also recognize reciprocity between people and wildlife. In other words, these worldviews attribute rights and moral standing to the non-human, natural world. Looking at human-caused extinctions from that perspective, it’s worth asking what right we have to cause species to disappear forever. Perhaps the world would be a better place if we saw wildlife as relations with whom we share this planet and thrive together.

Thanks for reading about why it’s bad when species go extinct!

Do you have thoughts on this important topic? Share with us in the comments! If you have feedback of more questions you’d like to see answered, let me know using the Contact page. If you enjoyed this post, please share with your friends on social media!