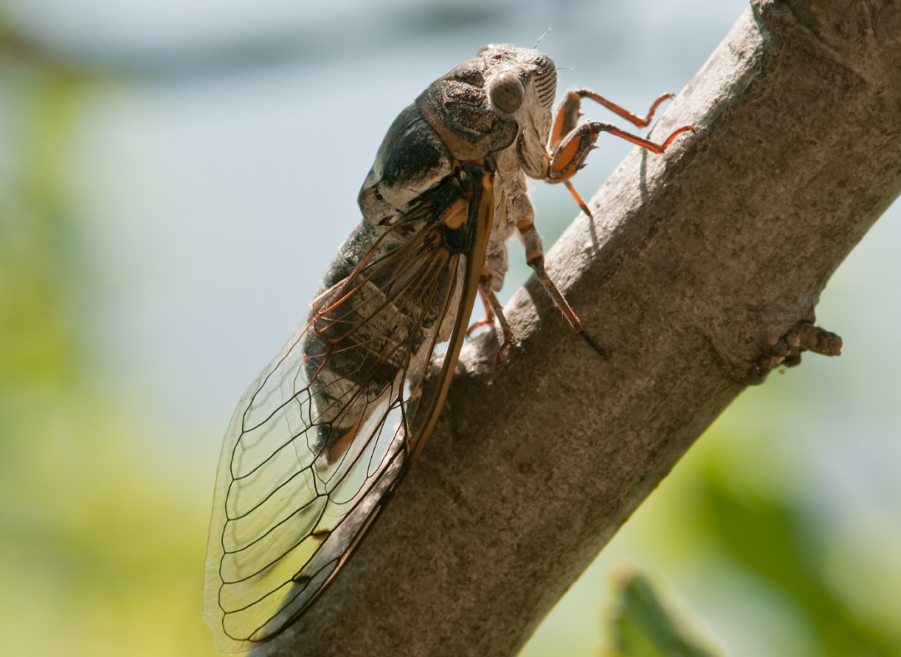 In many parts of the world, the familiar drone of insects is a welcome sign of summer. While crickets serenade us by night, cicadas are among the loudest and most active daytime singers of the bug world. These big, loud, and surprisingly stealthy insects are more often heard than seen, and have a truly alien appearance. In this Wildlife Spotlight post, let’s dig in to some cool cicada facts.

Also, a special shout-out to Mr. Meyer’s class at The Westminster Schools in Atlanta who suggested this fantastic post. If you’d like to ask a question or request a post on a nature topic you’re interested in, drop me a message with the Contact form! Now, on to cicada facts!

One of the most famous cicada facts is that some species emerge to breed in absolutely massive numbers. We’re talking billions of individual insects. When European settlers began colonizing North America, they witnessed these incredible mass-emergences and thought they were the plagues of locusts mentioned in the bible.

It was an easy mistake to make; the colonizers might never have seen cicadas before, and not in such outrageous numbers. The name stuck, and many people call cicadas locusts to this day.

Of course, this is the trouble with common names, and the reason why we like to use scientific names for studying the outdoors! Even if people call them locusts, cicadas are part of an order of insects called hemiptera, while real locusts are orthoptera. In other words, locusts and cicadas are about as closely related as we are to manatees or bats. Which is to say, not very!

2. Their mouth is a powerful straw

A key trait of all hemipteran insects is their mouthparts. All insects in that order have mouthparts designed for piercing and sucking. Cicadas are no exception, and use their sharp, straw-like mouthparts to pierce plant tissues.

Specifically, they suck fluid from the xylem, which transfers nutrients and water from a vascular plant’s roots to its leaves. Cicadas actually have special pumps inside their head which help pump the water along!

If you want to see a cicada’s “mouth”, you actually have to look underneath them. For safe keeping, they keep their sharp straw sheathed in a tube called the labium. They keep this under what looks like their “chin” (the labrum) and it extends down the center-line of their body on the belly side.

3. Cicadas are big but sneaky

It’s much easier to hear cicadas than to see them. Aside from the periodical cicadas that come out in the billions, most other species of cicada aren’t easy to find. Even if you hear them calling all around, it can be difficult to pinpoint the source.

Furthermore, most cicada species have camouflage that blends in with the green of summer vegetation. They also tend to spend their time high in the trees, where we are less likely to find them.

When you finally do find a cicada, it’s usually a bit of a surprise. Unlike some other groups of bugs we encounter often, cicadas get pretty big. Including their wings, many species in the US can easily be more than 2 inches (~5cm). One of the biggest species, Megapomponia imperatoria, native to Southeast Asia, gets up to 8 inches (20cm) in length!

Even big, alien-looking cicadas start from humble beginnings. Baby cicadas hatch from tiny eggs that their mothers put in small slits in the wood of tree branches and twigs. After sucking juices from the branch for a few days, they drop down to the ground.

At this point, they are about the size of a grain of rice! These tiny nymphs burrow into the ground, where they use their straw-mouths to suck on plant roots. As they molt and grow larger, they move to larger plants. The smallest baby cicadas may start with grasses, while larger nymphs feed on tree roots.

This trend means that the adult cicadas that come up every year are not the same ones that were born last year. These could be anyway from 3 or 4 to 10 years old, even for species that come out every year! It’s all a matter of timing.

5. They are the loudest insects in the world

Here’s one of the most mind-blowing cicada facts. Singing male cicadas are the loudest insect in the world!

Some species of cicadas can be louder than an outboard boat motor! Megatibicen pronotalis walkeri or Walker’s cicada is native to the American Great Plains, and its song can reach 105.9 decibels. Another cicada species, this time in Africa (the shrill thorntree cicada Bresivana brevis) has been recorded at 106.7 decibels.

These cicada songs are about as loud as a jackhammer or a garbage truck at close range. While cicadas don’t have “ears” the same way they we do, they do have membranes that are sensitive to vibration, much like our eardrums. Male cicadas actually need to disconnect those “eardrums” when they’re singing to prevent them from being damaged!

6. They are basically walking musical instruments

Male cicadas need some fancy equipment to make all that racket. Their principal noisemaker are a pair of organs called tymbals. These are membranes on their abdomen that are crumpled like a washboard, with curved, rib-like ridges.

With special muscles around the tymbals, they can bend and straighten those ribs, making a vibration. It’s not unlike popping the tamper-proof cap of a jar of jam or salsa. If you hold the cap loosely in your hand and push the pop-top, then let it spring back again, it can make a loud sound. Cicadas do this incredibly quickly to make their songs.

Some cicada species also have tymbal covers that can muffle or modify the sound of the tymbal. This works like a drummer leaving a hand or a pad on a drum when they strike it, changing the “texture” of the sound.

Finally, the male cicada’s abdomen is largely hollow. With compressed internal organs, it makes a big empty space that acts as a resonator. This is just like the soundbox of an ukulele or guitar!

The earliest fossil evidence of cicadas is from over 250 million years ago. That timeframe coincides with the beginning of the Triassic period, when the first dinosaurs emerged. This means that cicadas coexisted with dinosaurs for 165 million years! Of course, they also outlasted them by about 65 million years, since cicadas still exist today. How’s that for wild cicada facts? These are ancient critters!

8. Cicadas have a repertoire of songs

Even a single species of cicada doesn’t make only one sound. In fact, cicadas have a diversity of sounds that they can make in different situations. For example:

As it turns out, there are a lot of different cicada species out there. More than three thousand, as a matter of fact! More than 200 of these can be found in Australia, a major center of diversity for some unique groups of these noisy bugs. The United States has somewhere around 190 species of cicada, and 12 can be found in Canada. Only one species of cicada is known from the United Kingdom, specifically England. The New Forest cicada (Cicadetta montana) is only known from a small area of forest there, and may now be extinct. It was last seen in 1993.

10. They live longer than most insects

While periodical cicadas have to live a long time to wait for their mass emergences every 13 or 17 years, so-called “annual” cicadas still live long lives. Although the vast majority of cicada species appear during summer every year, this is not because they have a one-year life cycle. In fact, most cicadas spend two or more, and up to ten years growing underground as nymphs.

This means that on any given year, although you are seeing cicadas just like the year before, they are not the offspring of that generation. They are typically a mix of individuals born in the last few years, who took different numbers of years to grow and complete their molts. This probably depends on ground temperatures and the amount of available underground food.

With some periodical cicadas living up to 21 years, cicadas live a long time relative to most other insects, which live a couple of years at most!

11. Cicadas rely on special bacteria for their diet

The sap coming from plants’ roots, which passes through the xylem, is poor in nutrients. By contrast, the liquids coming from the leaves and down to the roots, passing through the phloem, are filled with sugars. This poses a problem for cicadas: if all they do is drink xylem sap, how do they get enough nutrition to survive?

Now for one of my favorite cicada facts: they do it with the help of microscopic friends. Specific bacteria species, including one called Hodgkinia cicadicola, live inside cicada’s guts. These bacteria convert the chemicals in the xylem sap to useful amino acids and other nutrients that the cicadas can use to live.

Plenty of other animals make most of their “living” on weird foods with the help of bacteria. Including:

12. They have built-in air conditioning

Most people associate the sound of cicadas with, hot weather. This absolutely checks out; cicadas are often most active at the hottest times of day. They have been recorded singing when its 110°F (43°C) or more!

Hanging out when its super hot actually has its advantages for the cicadas. Predators are less active when temperatures get sweltering in the mid-to-late afternoon.

Meanwhile, cicadas have their own built-in cooling systems because of their way of eating. Since xylem sap is mostly water, they have to drink lots of it to survive. This also means that they need to get rid of lots of excess water!

Fortunately for them, this works out via evaporative cooling, similar to how we sweat to cool ourselves off when it’s hot. Cicadas can pass excess water through special ducts that evaporate it out of holes in their thorax, or main body section. Because they are constantly sucking in new water through their straw-like beak, they can keep the water coming.

This continuous evaporative cooling lets cicadas bring their body temperatures down by 9°F (5°C) or more!

13. Cicadas build tunnels with their pee

This might take the cake among the weirdest cicada facts. As I already mentioned, cicadas have to get rid of lots of excess water from the very watery sap that they drink. They ditch most of it by “peeing” a sugary, watery substance called honeydew.

Sap-sucking insects like cicadas, and planthoppers produce loads of honeydew, and sometimes you can see it literally shooting out of them! In fact, there’s a group of insects known as sharpshooters for precisely this reason.

For cicada nymphs underground, this honeydew actually serves a useful purpose. It allows them to keep the dirt around their tunnel moist. Then, they can use their powerful front legs to shape it into tunnels and chambers for accessing their preferred foods: plant roots!

14. There are wasps that only attack cicadas

Did you know that there is an entire group of wasps that specialize in hunting cicadas? These cicada-killer wasps in the genus Sphecius are also known as “cicada hawks” for their appetite for our loudest insects. These beefy wasps can be up to 2 inches (5cm) long, and can be intimidating when encountered. However, unless you’re a cicada, they aren’t anything to worry about.

Female cicada-killers capture and paralyze cicadas by stinging them after building an underground nest in sandy soil. She leaves the paralyzed cicadas in specialized nest chambers along with one of her eggs. The hatched larva then eats the cicada to fuel its growth and development into an adult wasp.

Hooked on cicadas? Check out some of these great resources to learn more:

Thanks for reading cicada facts!

I hope you enjoyed cicada facts, and that you know these fascinating insects a bit better! As always, if you have questions or comments you can leave them below or reach out using the Contact page.