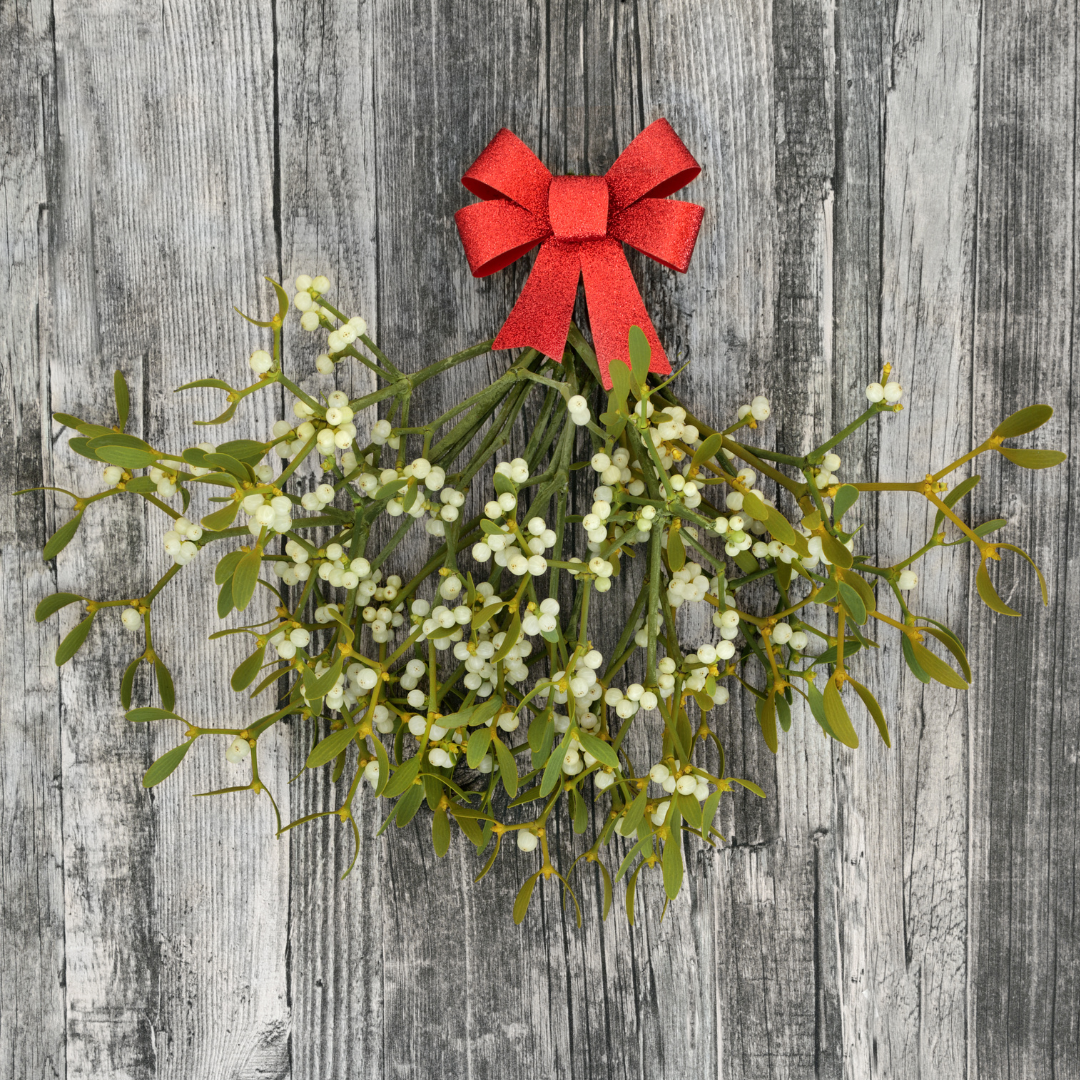 As the winter holidays approach, we are reminded of familiar, longstanding traditions. Even though they may be popular, they can also be mysterious. Where did they come from in the first place? One of my favorite examples is mistletoe.

Between pop songs and Christmas carols, everyone seems to love the flirty thought of puckering up under the mistletoe. But what even is mistletoe, and why do we have to kiss near it? Where does it occur in the wild, and why do we only see it in winter?

In this Wildlife Spotlight post, we’ll turn our attention to this mysterious plant.

Mistletoe in the wild

Even though we only see it as a holiday decoration, mistletoe is a wild plant species. As with other species with vague common names, the name mistletoe can apply to several groups of plants. They are typically relatively small and found in trees, and belong to the plant order Santatales. There are three key families:

The santalaceae, (relatives of the the popular incense sandalwood) are the ones that you’ll know from holiday traditions. The “O.G.” mistletoe, Viscum album is found throughout the U.K. and Europe, where it hangs out high in oak trees. This is the species most often associated with the Christian holiday and European traditions.

In North America, the most widespread species is Phoradendron leucarpum. It occurs just about everywhere from the East coast to Texas, and south of New Jersey.

So, now we know that mistletoes are not domestic plants, but a common form of wildlife. Of course, the same can be said about Christmas trees, although they are more often farmed. However, some key aspects of mistletoe biology make it very unusual, and probably hard to grow commercially.

Thief of the trees

For starters, it’s a parasitic plant. This means that it gets the materials that it needs to live from other plants. Like a sort of leafy pirate. It steals important things like:

This also explains why you’ll never find mistletoe growing on its own, and why all of the families mentioned above are found in trees. Mistletoes get what they need by stealing it from other plants. In fact, the scientific name of the North American mistletoes, Phorodendron, means “tree thief” or “thief of the trees”.

When mistletoe seeds get dropped onto a tree branch, they grow a specialized root called a haustorium. The haustorium penetrates the tree’s bark, probably using digestive enzymes and pressure. Then it taps into the plant’s vascular tissue like a little plant vampire. This allows the mistletoe to access the tree’s sap and all of the nutrients within.

Interestingly, mistletoes are specifically known as hemiparasites, or half-parasites. Unlike many other parasitic plants that are funky colors, mistletoes are green. And—you guessed it—this means that they can perform photosynthesis to get themselves some extra nutrition. This makes them only half-parasite!

This is all well and good, but it doesn’t explain why people smooch under this plant around Christmastime.

The European variety of mistletoe, Viscum album or the oak mistletoe, is understandably the first one to pop up in Western history. It was thought to have magical properties by Celtic druids, who climbed high up in oak trees to harvest it. The idea of mistletoe’s magical properties continued well into the middle ages, where people thought it had life-giving and fertility-boosting powers.

Part of the magic of mistletoes was no doubt that they’re evergreen. In other words, they are green all year, and don’t lose their leaves in winter like most other plants. Since they have to live in trees to survive as parasites, these balls of green must have impressed people hundreds of years ago. How did this one part of the tree stay green in winter when the rest looked so dead?

Reaching back into European history can also lead to some clues as to this plants’ weird name. If you’ve heard our Nature Guys episode titled simply “Mistletoe“, you may have heard that mistletoe can be translated as “poop on a stick”.

While this is a bit simple, it checks out historically. The “toe” in mistletoe likely comes from an old Anglo-Germanic root word “tan”, meaning stick or twig. Meanwhile, “mistle” may have come from an old Germanic word “mix”, which meant dung.

How’s that for a bizarre common name?

Ancient people used this name because they noticed that mistletoes grew where birds had pooped on tree branches. As you’ll learn in the last section of this post, this is not coincidence.

So, why is it that we’re supposed to kiss under the mistletoe? This tradition may actually be older than Christmas itself, and probably originated with Norse religion.

Although there are many versions of the legend, it goes something like this. The Norse goddess Frigg had a beautiful son named Baldr with her husband, Odin. In order to keep him safe, she visited every plant and animal in the world and had them swear not to harm him. Because of this, Baldr was effectively invincible: no arrow or spear or sword with a wooden or leather hilt could harm him. This was because they all involved some part of some plant or animal that had sworn never to hurt Baldr.

This made for some fun and games between Baldr and other gods, including his siblings, who would shoot at him with arrows. Since the arrows were made with wood from common trees, they couldn’t hurt him. However, Frigg had forgotten to ask mistletoe to protect her son. Knowing this, the mischief god Loki made a dart out of mistletoe and left it for the othe gods to find.

In another version of the story, Frigg convinced other gods to resurrect Baldr, and thanked them with kisses. Then, the mistletoe became associated with these divine smooches.

Mistletoe and other wildlife

Of course, there’s a lot more to mistletoe than holiday kisses and parasitism. For example, when I moved to the South and saw mistletoe all over the tall trees in Georgia, it got me wondering. How do mistletoes get high up in trees in the first place?

Like many other plants, mistletoes use fruits to disperse their seeds. In Santalaceae mistletoes, these are small, round, and rather squishy white or red drupes. This is a special name that botanists use to refer to fruits that only have a single seed inside.

These drupes are extremely attractive to wildlife for a number of reasons. They are highly nutritious, with a variety of amino acids and fats. Secondly, owing to the mistletoe’s evergreen nature, these berries are often available for hungry animals when other berries aren’t growing. This can make mistletoes a keystone species in some environments.

Many birds like thrushes (Turdidae) and waxwings (Bombycillidae) love to eat these seeds. However, they are filled with a very sticky goop. This is the key to how mistletoe gets around! Surrounded by gummy juice, these seeds can get stuck to a birds’ bill, feathers, or feet. Thus, when the bird lands on a new branch high in a tree and wipes its bill or cleans itself, the seed can become stuck to the tree’s bark.

Then the mistletoe gets to work!

Another way that this can happen is after the seed passes through a birds’ gut. When it comes out the other end, that bird poop can stick to a tree branch below and give the mistletoe a head start in its pirate life.

Mistletoe as a food source

While mistletoe is mildly toxic to people (and may be very toxic to pets, particularly cats!), many wild animals will eat it. Squirrels, porcupines, chipmunks, and other tree-dwelling mammals will feed on the berries and leaves when food is scarce. Likewise, there are butterflies in the hairstreak subfamily (Theclinae) whose caterpillars can only eat mistletoe leaves.

Home is where the kissing happens

Mistletoes typically grow as dense balls of little branches and leaves. Furthermore, they can create strange growth patterns in their host trees, which cause loads of shorter branches to grow tightly together. These basket-like growths are known as witches brooms to English speakers. The name for mistletoe in some Indigenous American languages acknowledges this, such as the Navajo name meaning “basket on high”.

Birds of all shapes and sizes take advantage of these ready-made baskets to make their own homes and nesting sites. While I doubt these birds, which range from predators like Spotted owls (Strix occidentalis) and Coopers hawks (Accipiter cooperi) to smaller songbirds, do a lot of kissing, mistletoes are definitely inviting. Their dense branching and evergreen foliage keep them well concealed. They’re also sturdy and probably very well insulated!

Thanks for reading about mistletoe!

Have you encountered wild mistletoe in your adventures, or seen any of the other species in the Southern hemisphere? Do you have your own connection to mistletoe? Let us know in the comments! If you have questions or other requests for Wildlife Spotlight posts, shoot me a message using the Contact page.